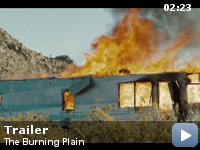 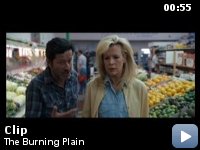 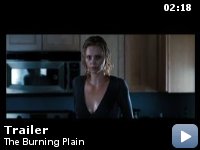 A drama with a two-tiered storyline concerning a mother and daughter who try to form a bond after the young woman's difficult childhood.

Storyline
The Burning Plain follows the story of several different people separated by time and space — Sylvia, a woman in Oregon who must undertake an emotional odyssey to rid herself of her past; Mariana and Santiago, two teenagers trying to piece together the shattered lives of their parents in a New Mexico border town; Maria, a little girl who goes on a border-crossing voyage to help her parents find redemption, forgiveness, and love; and Gina and Nick, a couple who must deal with an intense and clandestine affair… because they are both married.

The title can be translated to Spanish as "El Llano en Llamas", the title of Juan Rulfo's novel, one of Mexico's most famous.

Errors in geography:
Sylvia lives in Portland, but works at a restaurant on the ocean – two hours away.

Sylvia:
What grade are you in?

Sylvia:
Do you have a boyfriend?

Maria:
Nope. Do you?


Whereas his previous screenplays were male-driven, The Burning Plain
stands out for having three women at the center of things: Sylvia
(Charlize Theron) is a restaurant owner who, despite what appears to be
a relationship with one of her employees (John Corbett), is deeply
unsatisfied and spends all of her free time smoking cigarettes and
sleeping with other men; Gina (Kim Basinger) is your typical housewife,
except she's survived breast cancer and is cheating on her husband
(Brett Cullen) with a Mexican man named Nick (Joaquim de Almeida);
Mariana (Jennifer Lawrence), Gina's daughter, is probably the most
messed up of the three, especially after she starts dating Nick's son
Santiago. And finally, remaining on the female front, there's also a
little girl, Maria, who travels from Mexico to the United States with a
family friend to find her long lost mother.

As always with Arriaga, these stories are linked by a tragic event: in
Amores Perros and 21 Grams it was a car crash, while in Babel it was a
gunshot wound. This time, the connection, though not that obvious, is a
burning trailer seen in the first scene of the film. The twist is that
the writer/director has gotten more ambitious in telling yet another
human tragedy: instead of having a geographic separation between the
three plot strands, like he did in Babel, he goes for the most classic
of choices, namely time shifts, only those aren't proper flashbacks,
and therefore, as one can expect, it takes a while before all the
pieces fit together. By choosing this narrative solution Arriaga is
trying to tell us he can do just as fine a job as his former
collaborator Inarritu behind the camera, but it's hardly a surprise to
find out he doesn't always succeed: being a first-time director, he
prefers to keep things safe with a classic style rather than adapting
some of Inarritu's tricks (most notably the chromatic link between
character and mood) to his own vision. And it must be said that a more
experienced filmmaker would have known how to avoid the emotional
flatness that comes from the few scenes (two or three at the most)
where Arriaga panders to the genre's most idiotic clichés (three words:
hospital, coma, confession).

Overall, however, the narrative is very solid, and having learned a
valuable lesson from his past creative partners Arriaga has set up a
cast that doesn't really include any big names (Theron notwithstanding)
but delivers a string of compelling performances: the most touching
turns come from Basinger, always good when playing vulnerable, damaged
women, and de Almeida, whose tenderness comes off as a real surprise
given his fame (in the US at least) as rough crime lords in Desperado
and the third season of 24. Lawrence pulls off her tricky role with a
maturity that justifies the Mastroianni Award (i.e. Most Promising
Newcomer) she won at the Venice Film Festival. Cullen, Corbett and
Danny Pino impress despite the limited screen time at their disposal,
and Theron, still partially recovering from the Aeon Flux fiasco,
portrays Sylvia with the kind of understated intensity that
characterizes her best work.

Verdict: if you were unmoved by Inarritu's films, this is not for you.
Otherwise, give it a try: it's not as mesmerizing as 21 Grams, but in
its best moments it comes close enough.