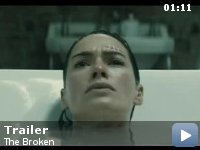 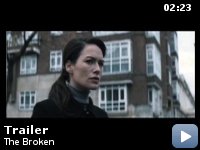 In London, the radiologist Gina McVey organizes a surprise birthday party to her father John McVey with her boyfriend Stefan Chambers…

Storyline
In London, the radiologist Gina McVey organizes a surprise birthday party to her father John McVey with her boyfriend Stefan Chambers, her brother Daniel McVey and his girlfriend Kate Coleman. On the next day, she sees herself driving a car on the street and she follows the woman to her apartment, where she finds a picture of her father and her. While driving back, she has a car crash and loses parts of her memory; further, she believes Stefan is another man. Gina decides to investigate what is happening and unravels a dark reality.

The inventive spelling of the title reads somewhat silly in Norwegian and Danish since the Ø in broken is a letter in the alphabet in these languages and sounds like the "u" in "burden". In addition "brøken" is a Norwegian word meaning "the fraction".

Continuity:
When Gina wakes up and sits on the edge of the bed you can see she is topless. if you look closely you can tell she is wearing panties, and still appears to be when she leaves the room. When the camera goes to show her walking through her house her naked butt is visible, so what happened to the panties?

Opening Quote:
You have conquered and I yield.

Opening Quote:
Yet henceforward art thou also dead – dead to the World, to Heaven, and to Hope!

Opening Quote:
In me didst thou exist – and, in my death, see by this image, which is thine own, how utterly thou hast murdered thyself.

Watching “The Broken” is like playing an endless game of Clue without
ever finding out who killed Mr. Boddy. It's a mystery without a
solution, a tense psychological drama that reveals nothing other than
how tense and psychological it is. It plays mind games only with
itself, leaving the audience to watch from the sidelines in a bored,
confused stupor. The idea behind it is intriguing, and for a time, it
successfully builds itself up. The thing is, the act of building is
pointless if there's no height requirement. At a certain point, it
becomes painfully clear that the story will only keep building without
ever reaching anything. I do give it credit for creating the right
atmosphere; the characters inhabit a moody, subdued world where nothing
seems safe, not even a person's own home. But atmosphere can only go so
far, even in a horror film. It also needs an understandable story with
an ending that doesn't leave us with more questions than answers.

It doesn't help that “The Broken” is unbearably slow, and this is
despite the relatively short running time of eighty-eight minutes.
Specific shots are dragged out so long that I eventually stopped
waiting for something shocking to happen. It works only the first few
times, at which point I kept in mind that suspense is most effective
when things go slowly. After those few times pass, however, the film
comes dangerously close to being boring, moments of horror and all.
This is probably because it does a fine job showing us what happens,
but it does a terrible job explaining why or how it's happening. By the
end of the film, I was unable to make heads or tails of what I had just
seen. What a shame, especially since it opens on such a promising note.

The film begins by quoting the final lines of Edgar Allen Poe's short
story “William Wilson”: “You have conquered, and I yield. Yet,
henceforward art thou also dead–dead to the World, to Heaven and to
Hope! In me didst thou exist–and, in my death, see by this image,
which is thine own, how utterly thou hast murdered thyself.” The story,
you see, explores the theme of the doppelganger, or the double, where
the self is divided amongst two separate yet identical bodies. In Poe's
story, another William Wilson–who looks similar and shares the same
birthday–continuously haunts the protagonist to the point of insanity.
The same theme exists in “The Broken,” which tells the story of Gina
McVey (Lena Headey), a British radiologist who, after seeing a clone of
herself, gets into a serious car accident. As she recovers, she begins
to fear that things aren't quite right, that her French boyfriend,
Stephan (Melvil Poupaud), isn't the person he once was.

From here, the story takes a long-winded journey through strange
territory, where mirrors constantly shatter and fragmented bits of
memory keep flashing on the screen. Gina keeps trying to make sense of
the crash, and apparently, so is writer/director Sean Ellis, who
constantly shows it in slow-motion replays from various angles. He also
relies greatly on composer Guy Farley, whose score is almost entirely
made up of dissonant crescendos. It creates a mood, but what good is
mood without context? Scary things keep happening, yet there's no
explanation for any of it, which tells me one of two things: Either
this movie is an experimental art piece that intentionally challenges
rational thought, or Ellis was so taken by the psychological themes
that he neglected to focus on an actual plot. It's difficult to believe
that it's the former, given the fact that Gina is not the only
character with a doppelganger problem. Her American father (Richard
Jenkins), her brother (Asier Newman), and her brother's wife (Michelle
Duncan) are all affected in some way, probably because of a scene early
in the film–when the entire family eats dinner at the father's house,
a large mirror in the dining room suddenly falls over and shatters.

For the sake of argument, let us say that “The Broken” is intended to
challenge rational thought. Are we to assume, then, that the plot
itself is irrelevant, that we're only supposed to follow the
psychological implications? If that's the case, then there's no better
example of it than a plot twist near the end of the film, which, if you
choose to interpret it metaphorically, effectively raises questions
about which side of a mirror represents the reflection.

But again, the fact that more than one character has a doppelganger
makes the idea difficult to accept. How could such a broad
psychological concept apply to so many people? Maybe this film would
have worked had it focused entirely on Gina, because at least then the
mystery would be much less open to interpretation. There would be some
sense that the story is actually reaching for something. When you have
multiple characters with evil doubles of themselves, the symbolic ideas
are bound to get hopelessly confused with one another. Such is the
problem with “The Broken,” a film that puts too many characters into a
needlessly enigmatic story. I have no doubt that Ellis is trying to get
at something, but for the life of me, I haven't a clue what it is. The
only thing I got out of it, aside from the atmosphere, was a desire to
reread the works of Edgar Allen Poe. So maybe seeing this film wasn't
such a bad idea after all.