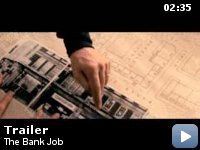 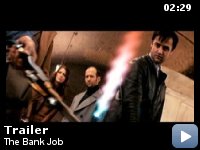 Martine offers Terry a lead on a foolproof bank hit on London's Baker Street. She targets a roomful of safe deposit boxes worth millions in cash and jewelry. But Terry and his crew don't realize the boxes also contain a treasure trove of dirty secrets – secrets that will thrust them into a deadly web of corruption and illicit scandal.

Storyline
Business is slow for Terry Leather, a London car dealer, married with children. He's an artful dodger, so Martine, a former model with a thing for him, brings him her scheme: a bank's alarm is off for a couple weeks, so let's tunnel into the vault. He assembles a team, not realizing her real goal is a safe-deposit box with compromising photos of a royal: she needs the photos to trade for avoiding a jail sentence – and MI-5, or is it MI-6, is pulling the strings two steps removed. A Trinidadian thug, a high-end bordello owner, and a pornographer also have things stored in the vault, so the break-in threatens many a powerful personage. Is there any way these amateurs can pull it off?

Taglines:
The true story of a heist gone wrong… in all the right ways.

Roger Donaldson said one of the most difficult days of filming was when he filmed the brothel scene. The scene called for the women to be walking around wearing only garters. However, Donaldson said that when he went to film the scene he discovered that most of the women shaved their genitals, which would have been anachronistic for 1971. So the actresses had to wear pubic wigs called "merkins." This caused a problem because the merkins were hard to secure in place and kept slipping, causing Donaldson much aggravation.

Anachronisms:
By 1971, almost all new cars in Britain were delivered with reflective white / yellow plates (introduced in 1966). So it would be very odd to see silver on black plates on a nearly new car (such as the Triumph driven by the MI6 agents).


If "The Bank Job" were fiction, it would be a fairly decent robbery
caper. As it is, "The Bank Job," a veritable documentary and realistic
whodunit, is awesome.

Unlike most films, this one requires a couple of advance tips: First,
watch it with the improbable idea in mind that most of it is actual,
hard-to-believe truth; second, don't be impatient. As the story of a
1971 bank robbery begins, the setting in London, the parade of
seemingly unconnected stories and characters is rather confusing,
complex, disjointed. But stay with it – there is a crescendo of
excitement and excellence.

The true elements of "The Bank Job," some hidden until recently by
Britain's "D Notice" censorship law (modified in 1993, becoming DA, or
Defense Advisory) are these:

2. There was serious police corruption in London in the 1970s, cops on
payrolls of drug dealers and pornographers.

3. Princess Margaret was involved in a series of affairs, some caught
on compromising photos which were not published by the otherwise
relentlessly sensational British press, under the D-Notice rule.

4. There was a militant British black-power advocate, called Michael X,
involved in a one-man, multi-country crime wave. (In 1971, John Lennon
paid for Michael X's bail, something not mentioned in the film.)

"The Bank Job" director Roger Donaldson (of "No Way Out") brings
together all these true threads in a way that may be true even in its
totality, director and cast prevailing over some shoddy work from too
many writers.

The content is all true, the context is excitingly possible. Did the
government, in trying to prevent exposure of Princess Margaret by
evidence in Michael X's possession, mastermind the bank robbery? Was
MI-5 or MI-6 (says a policeman in the film: "I never remember which is
which") involved, and actually assisting the robbers? Again, possibly.

The cast is remarkable: Jason Statham is the ringleader, the bad guy of
"Transporter" and "The Italian Job" turning into a scourge of the
really bad guys. Saffron Burrows, James Spader's vamp nemesis on
"Boston Legal," brings her remarkable name and looks to the criminally
and emotionally ambiguous major female role.

Peter De Jersey is a totally scary Michael X; David ("Poirot") Suchet
is a frightening crime lord; and a whole host of top British stage
actors fill in big roles and small ones. Don't be misled by reviews
speaking of a so-so thriller – "The Bank Job" is a great deal more than
that, even to the point that you may want to see it more than once.