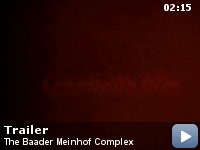 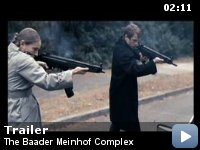 A look at Germany's terrorist group, The Red Army Faction (RAF), which organized bombings, robberies, kidnappings and assassinations in the late 1960s and '70s.

Storyline
Germany in the 1970s: Murderous bomb attacks, the threat of terrorism and the fear of the enemy inside are rocking the very foundations of the yet fragile German democracy. The radicalised children of the Nazi generation lead by Andreas Baader, Ulrike Meinhof and Gudrun Ensslin are fighting a violent war against what they perceive as the new face of fascism: American imperialism supported by the German establishment, many of whom have a Nazi past. Their aim is to create a more human society but by employing inhuman means they not only spread terror and bloodshed, they also lose their own humanity. The man who understands them is also their hunter: the head of the German police force Horst Herold. And while he succeeds in his relentless pursuit of the young terrorists, he knows he's only dealing with the tip of the iceberg.

Taglines:
The children of the Nazi generation vowed fascism would never rule their world again.

As an immediate reaction to the movie, Ignes Ponto, widow of Jürgen Ponto, whose assassination is portrayed in the movie, returned her Federal Cross of Merit. She was angry that the Federal Republic of Germany has never even created a memorial for victims of the RAF, but instead helped to finance films like this one about the members of the RAF. Also, she said, she had not been warned about the graphic portrayal of Ponto's assassination when she was invited to the movie premiere and felt humiliated by the producers for making her sit through this without a warning. About a month later, she filed a lawsuit against the producers, who claimed that every scene is historically accurate, because the assassination of her husband, which she had to witness from the next room, was not portrayed as it happened. She demands the scene of the murder of her husband be cut from the movie. The filmmakers claim that they had tried to contact her during production to get the scene right but she had no desire to cooperate. Before this movie, there had been no portrayal of Ponto's assassination on film and she felt the staging of the movie was lurid and dishonoring to her husband. As of this writing, no decision has been reached about the lawsuit.

Anachronisms:
For a split second during the bombing of an American military HQ in Frankfurt, a soldier is scene bleeding profusely on a poster for The Dictator's album, Manifest Destiny. This bombing took place in 1972, while Manifest Destiny was released in 1977, and The Dictators didn't even form until 1973.

Brigitte Mohnhaupt:
Stop seeing them the way they weren't.

Better than most critics want to admit


I agree with the other comments on the following points: the film does
indeed concentrate on the culprits and their actions in a documentary
way (as opposed to an interpretation of the RAF's ideas and motivations
from a clear-cut political standpoint). Although the victims DO appear
they are not characterized more closely; the only representative of the
state is Horst Herold (head of the BKA), politicians do not show up at
all, the media appear only in the shape of Springer, konkret and
Spiegel and even the lawyers (Haag, Croissant, Schily, Ströbele, etc.)
are merged into only one (fictitious?) character. I for one do agree
with this approach and if you are prepared for it you probably can live
with it too. In any case, despite all the chases, shootouts and
explosions it hasn't become a mere action-film.

What's more problematic is that the film follows the book by Stefan
Aust VERY closely. Therefore the dramaturgy is more similar to "real
life" than to a classical feature film (e.g. there are many changes in
pace, several climaxes are distributed over the course of the film and
a proper arc of suspense is somewhat missing). "Fortunately" real life
offered a culmination of events with the Schleyer kidnapping in the
"German Autumn" 1977, so that the film ends in a reasonably satisfying
way. Nevertheless the end credits come a little abruptly.

The second problem is that the film tries to show virtually ALL events
from the book (only some minor incidents like the Mahler detention,
Peter Urbach, the burglaries in registration offices in order to steal
blank passports or the visit of Jean-Paul Sartre in Stammheim are
missing) so that it needs to squeeze 10 years of history into 140
minutes. The result is a film with breakneck speed at some points. The
better scenes (e.g. the training camp in Jordan or the lawsuit in
Stammheim) are obviously those where the film catches breath, calms
down and takes its time for the actors to shine.

The quality of the acting ranges from good to fantastic (with very few
exceptions like Alexandra Maria Lara, who is nothing more than
wide-eyed again and who thankfully doesn't even have dialogue).
Especially Martina Gedeck and Johanna Wokalek are sensational. It is
THEIR film and the conflicts in Stammheim which led to Meinhof's
suicide are acted Oscar-worthy. But Michael Gwisdek (Ensslin's father),
Jan Josef Liefers (Peter Homann), Sebastian Blomberg (Rudi Dutschke),
Nadja Uhl (Brigitte Mohnhaupt) and Hannah Herzsprung (Susanne Albrecht)
are also very good.

The production values are excellent too. A lot of locations, a great
deal of main and supporting roles, hundreds of extras, good special
effects (mainly explosions) and a set design and costume design which
creates a very coherent 70's atmosphere: you can see that the film cost
a lot of money. Every cent is on the screen.

I didn't like the choice of music that much. Deep Purple's "Child in
Time" is always great to hear, but the rest (Janis Joplin, The Who, Bob
Dylan) is just too mainstreamy and unimaginative for my taste (but
probably also very expensive). Why not use MC5, Ton Steine Scherben or
Ennio Morricone's "Vamos a matar, companeros"?

Now I'm looking forward to the reactions and reviews from other
countries, who probably don't know this part of German history very
well. In the US I expect the criticism that there are too many naked
people, too many swear words and even more cigarettes (every one in BMK
smokes everywhere and at all times), in order to distract from the
politics of the film 😉 "Der Baader Meinhof Komplex" isn't the
masterpiece on the history of the first generation of the RAF that I
had hoped for in my comments on "Todesspiel", but altogether it is a
very suspenseful, fascinating, densely narrated and well acted film.
Hopefully it will not be the last word on the subject, but it succeeds
in giving the audience the basic RAF knowledge on which future (less
neutral, more opinionated) movies can build their stories.