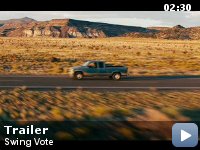 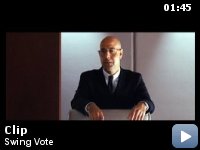 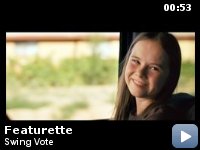 In a remarkable turn-of-events, the result of the presidential election comes down to one man's vote.

Storyline
November, 2004, New Mexico. Bud is a slacker with one good thing in his life, his engaging fifth-grade daughter Molly. On election day, Bud is supposed to meet her at the polling place. When he doesn't show, she sneaks a ballot and is about to vote when the power goes off. It turns out that New Mexico's electoral votes will decide the contest, and there it's tied with one vote needing recasting – Bud's. The world's media and both presidential candidates, including the current President, descend on Bud in anticipation of his re-vote in two weeks. Can the clueless Bud, even with the help of Molly and a local TV reporter, handle this responsibility?

Taglines:
One ordinary guy is giving the candidates a reason to run.

Revealing mistakes:
The power pole outside Bud's trailer has there is no power meter, even though wires go to the trailer.

Radio Announcer:
After a hotly contested race Americans go to the polls today for what promises to be a very close election. The Republican incumbent Andrew Carrington is hoping to hold on to the Oval Office, taking on Democratic challenger…

If you buy into it, you'll love it.


Yes, the whole concept is absurd, and as a result the film will
probably take a lot of criticism, but I really enjoyed every minute of
it at an early screening this evening. I enjoy Kevin Costner's work
except when he tries to go action hero and he is thankfully getting too
old for that unless he decides to buy growth hormone from Stallone or
something. He was terrific in Mr. Brooks and he excels once again in a
totally different role. It is the sort of character that he does best,
more akin to his "Bull Durham" role.


The real find of the film was Madeline Carrol who played his daughter.
She joins Abagail Breslin, Dakota Fanning , and Anna Sophia Robb in a
current crop of extremely talented tweeners.

I enjoyed the entire cast and it was great to see Judge Reinhold for
the first time in awhile.

The whole concept of how Costner's vote becomes so important is one
that is hard to swallow, but if you go along for the ride I promise
that you will have a great time.

Late in the film Mare Winningham appears in perhaps the films most
powerful though least appropriate scene. It is her only scene. I
believe it was used to hammer in a serious message though the scene had
little to do with the message of the film other than shift to a more
sober mood. Sober may not have been the best choice of words to
describe the scene though.

One of the nicer aspects of the film is its terrific music. A mix of
tunes from several decades centered around Marshall Tucker's "Can't You
See" really makes for a nice soundtrack.

Ultimately the film has a great message about the importance of one
person, one vote. And if it gets a lot more democrats(whoops I mean
Americans) to vote this year, then in my opinion it will have done a
great public service in addition to being solidly entertaining. And no,
it does not have a liberal agenda, so all you Rush fans need to hold
judgment before slamming the film. Unlike this reviewer, the film is
really good at not taking a political stance. The film depicts all
politicians as if they would stoop to anything to get elected, and
garners a lot of laughs with that premise.

I want to add one last thing. I would call this a family movie except
for the profanity. I took my 9 year old precocious daughter and she
loved it, but there was actually a running joke about Costner's
character's love of swearing. So if a little swearing and some
references to controversial issues (abortion, gay marriage, legal pot)
are OK with you, bring the kids. Like I said, it does have a good
message.