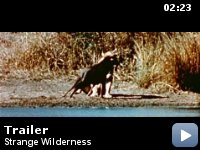 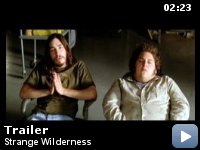 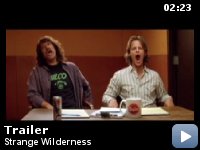 With the ratings dropping for a wilderness-themed TV show, two animal fans go to the Andes in search of Bigfoot.

Storyline
When his father dies, Peter Gaulke inherits "Strange Wilderness," dad's TV show about animals. After ratings plummet and the show is canceled, we watch a long flashback to see its demise. The studio head gives the show two more weeks. An old friend brings a story about Bigfoot in Ecuador, so a long road trip ensues with stops along the way and enough problems, misjudgments, and deaths to sink a less intrepid band. Peter's team faces competition from a better-funded and more practiced set of rivals. Who will find Bigfoot first, and will they get it on tape and save the show? Can Peter make dad proud?

Taglines:
They could solve the world's biggest mystery, if only they had a clue.

The two main characters are named after the film's screenwriters.

Continuity:
When Milas comes to visit Peter in his apartment, Peter lights a bong using water from his aquarium and accidentally puts a goldfish into the bong. When he says "Oh God, that little guys gonna think he's a shark", the bong is clear. When the scene cuts back it is filled with smoke.

Peter Gaulke:
[talking on phone]
Look at my dad. He was the king. I mean, no matter what happened, I mean he was as cool as a cucumber. He never forgot a line, and he never let anything ruffle him. My dad was the king. No doubt. And his TV show ruled the ratings.
[lights up weed]

Peter Gaulke:
What was that?
[coughs while getting high]

Peter Gaulke:
Excuse me. It was a wildlife show called Strange Wilderness. Oh, you remember that? Do you remember my dad? Oh cool. Yeah, then he died and then I took over the show, then it went all to hell. I mean, I'm nothing like my dad. Nothing at all. I don't know. I don't know if it was like I wasn't bright enough, or I didn't work hard enough, or I used to smoke a lot of dope. So…

Not for everyone, but this movie is a lot of laughs


I have read a lot of negative reviews about this movie. I'd have to say
that they are 100% correct. I have also read some reviews by people who
absolutely loved it. They are also 100% correct. I tend to be more
toward the second group, but I can definitely see both sides.

The plot makes no sense. The dialogue is at times very bad. However (a
very big however), I think that this movie knows its audience and
delivers to them a light-hearted "stoner" movie with some very funny
moments (the shark voice-overs, for example). This is a Happy Madison
movie. Yes, times have changed from Billy Madison and Happy Gilmore
(two of the originals, no doubt). However, I think that many people go
into these types of movies expecting something more "mainstream," such
as Wedding Crashers or 40-Year-Old Virgin. The sure absurdity of the
movie was enough for me. Much of the dialogue, albeit very goofy, has a
certain improv feel to it, letting the actors play with the scenes.

To end this long "review," think of movies like Beerfest, Super
Troopers, Grandma's Boy for a quick comparison. Does this movie win any
awards? Absolutely not. Is it probably better on DVD? Perhaps. However,
if these laugh-aloud "stoner" movies are your thing, then I think
you'll enjoy this movie.