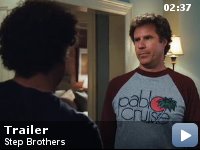 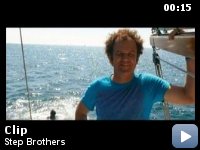 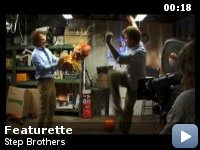 Two aimless middle-aged losers still living at home are forced against their will to become roommates when their parents get married.

Storyline
Brennan Huff and Dale Doback are both about 40 when Brennan's mom and Dale's dad marry. The sons still live with the parents so they must now share a room. Initial antipathy threatens the household's peace and the parents' relationship. Dad lays down the law: both slackers have a week to find a job. Out of the job search and their love of music comes a pact that leads to friendship but more domestic disarray compounded by the boys' sleepwalking. Hovering nearby are Brennan's successful brother and his lonely wife: the brother wants to help sell his step-father's house, the wife wants Dale's attention, and the newlyweds want to retire and sail the seven seas. Can harmony come from the discord?

Taglines:
They grow up so fast.

Audio/visual unsynchronized:
During Brennan's song at the Catalina Wine Festival, the drums don't match up with what Dale is playing several times.

Brennan Huff:
…with the lady.

aerobic instructress on TV:
Let's slowly get those hips up.

A combination of Fergie and Jesus…Step Brothers


I never in my wildest dreams thought I'd ever utter these words about a
Will Ferrell vehicle, especially one with Adam McKay as
collaborator—besides that Pearl video The Landlord on the internet last
year—but here it is. Step Brothers is an absolutely hilarious film.
From end to end, I don't remember the last time I've laughed this hard,
without stop. This is what Ferrell needs to do, no more of those
bio-spoofs of idiots that fall flat due to their tired joke. He is
unstoppable as a part of an ensemble when he doesn't have to be the
center of attention for an hour and half. The guy is obnoxious, and
while funny, the more freedom he gets, the more annoying he is. Having
a guy like John C. Reilly to play off of helps rein him in and give the
audience a break, allowing the jokes to breath and not become stifled
by the monotony of his schtick. Like Old School before it, Ferrell
kills in smaller doses. He has shown me that ability again here and
whereas I won't even keep Anchorman or Talladega Nights on screen when
flipping through the television, I seriously can't wait to revisit this
one again.


There is no bloated plot involved or even a love interest to distract
from the comedy like the previous two "Everyman" entries in the
Ferrell/McKay tag team's canon. I do believe that is the most
refreshing aspect here; they finally see that you don't need a
contrived romantic bent to be successful, we as an audience don't need
to see the schlubby guy get the attractive girl, that is a cliché used
way too often. We go to see a film like this to be entertained and to
cause us to wet our pants with unstoppable laughter. As a result there
are no lulls as even when the two stars begin to see how they must
shape up and become adults for once, the awkwardness brings the laughs
as well.

Step Brothers isn't winning any Oscars any time soon. With a premise
involving the union of two older professionals, both of whom have
40-year old sons still living at home, devoid of responsibility, and
lacking serious occupations, what do you really expect? Nancy Huff,
(Mary Steenburgen showing that she is still around Hollywood), and
Robert Doback, (Richard Jenkins letting his funny side out to
complement the wonderful dramatic turn he gave in this year's The
Visitor), are in love and perfect for one another. Their sons,
unbeknownst to them at first, are also soulmates in the best friend
platonic way. Completely the same person, right down to the hiding
things in the kitchen while sleepwalking at night, Brennan and Dale are
children trapped in adult bodies who waited forty years to be brought
together. The chemistry between Ferrell and Reilly is unstoppable on
screen, they are having fun, they must be improvising, and truthfully
not a second falls flat.

With so many gags, one would think it'd all seem a bit disparate and
thrown together, but the filmmakers and stars have sewn everything up
nicely. You want a rap video that is the most offensive thing you'll
hear all year? Get Brennan and Dale to create a music talent agency.
You want an a cappella rendition of Guns N' Roses? Give Brennan a
cocky, pompous brother who can afford singing/voice listens for his
entire family—absolutely priceless, and Adam Scott kills in this role,
"Pow!". You need some gratuitous fake nudity? Give Ferrell a chance to
rub his genitalia on Reilly's drumset. Check, check, and check. These
guys cover all their bases, not to mention the swearing quota. I am
surprised that they approved an R-rating here because it is so vulgar.
The fact that a couple lines from the trailer didn't make the final cut
shows that the actors must have improvised and done multiple takes of
each scene. As a result, I'm sure they all tried to be as creatively
crass as they could and to fantastic result. Some of the gems that spew
forth ever so naturally are one-liners that will be repeated over and
over again.

Really, it is these vulgarities that make the film that much more
enjoyable to me. I think that McKay and Ferrell took a page out of the
Apatow machine's book realizing a hard-R can and will sell. No one
holds back at all, some of the sarcasm even makes the characters cry
because it is so harsh. I love this aspect as it plays into the fact
that these are 8-year old adults. Their excess of childlike exuberance
and simplicity of mind and life—and let's not forget the way their
parents react by either screaming and going to the Cheesecake Factory
bar or coddling them as only a mother can do—adds to the absurdity of
the situation and the laughs. Dale and Brennan fight, bicker, and
eventually do everything together because they aren't just
stepbrothers, no they are brothers for life in terms of their internal
makeup. Think you and your sibling growing up in grade school, multiply
that to the nth degree in terms of sex, violence, and language, and
maybe you will be able to imagine what's in store for you once you sit
down at the theatre. Just don't forget to stay after the first short
run of end credits as the best jungle gym park brawl ever is awaiting
you. Those kids didn't even have a chance.

TagsUSA
100 Feet
The Mummy: Tomb of the Dragon Emperor