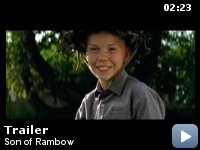 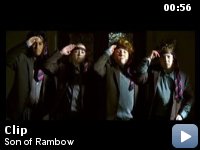 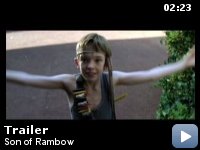 During a long English summer in the early 1980s, two schoolboys from differing backgrounds set out to make a film inspired by
First Blood.

Storyline
SON OF RAMBOW is the name of the home movie made by two little boys with a big video camera and even bigger ambitions. Set on a long English summer in the early 80's, SON OF RAMBOW is a comedy about friendship, faith and the tough business of growing up. We see the story through the eyes of Will, the eldest son of a fatherless Plymouth Brethren family. The Brethren regard themselves as God's 'chosen ones' and their strict moral code means that Will has never been allowed to mix with the other 'worldlies,' listen to music or watch TV, until he finds himself caught up in the extraordinary world of Lee Carter, the school terror and maker of bizarre home movies. Carter exposes Will to a pirate copy of Rambo: First Blood and from that moment Will's mind is blown wide open and he's easily convinced to be the stuntman in Lee Carters' diabolical home movie…

Several instances of CG modification during post production are pointed out in the DVD commentary. At 1:17, 86:49, and 90:23 in the theater, both the SMOKING and NO SMOKING signs were added. At 43:48 where Lee Carter pinches the Guide Dogs for the Blind statue, "OPEN 5 DAYS A WEEK" was added on the store marque. At 57:29 the sign "Sixth Form Common Room" was added. At 58:00 the clock in the school clock tower showed the wrong time for the scene, so it was changed.

Anachronisms:
Three different scenes in Lee Carter's kitchen include a flat-screen TV in the near background, turned on and mounted on the wall.

Will:
O my God, I've come to say thank you for your love today. Thank you for my family and all the friends you give to me. Guard me in the dark of night, and in the morning, send your light. Amen.

A Fantastic Movie About the Wonders of Childhood


I recently took this movie in at the 2007 Sundance film festival and am
quite glad that I made the effort to sneak this little gem in. The
movie was made by the very talented Garth Jennings of the famed music
video production team Hammer and Tongs known for their visionary music
videos and previously Hitcherhiker's Guide to the Galaxy. Set in an
average English town in 1982 the movie revolves around the interesting
life of a 12-13 year old boy named Will whose family is part of a
strict religious group that prohibits him from having any friends
outside the group and strictly forbids him from watchings any TV or
Movies. Without these usual sources of childhood entertainment Will
finds other ways to pass the time, namely in drawing out his
flourishing imagination that he scribbles and doodles all over the
pages of his bible. One day Will unexpectedly crosses paths with the
school terror Carter who also happens to be an amateur bootlegger at
the local movie theater. Will, whose never seen a movie before is
caught off guard when at Carters home he sees Rambo playing on the TV,
the visuals of the movie explode in Will's imaginative mind and from
there on out Will is forever changed. An unlikely friendship begins
between Will and Carter as they begin production on Carter's home movie
masterpiece, Son of Rambow. The two children begin coming closer before
their friendship is tested by a new-wave French exchange student Didier
Revolve. As the friendship between Will and Carter begins getting
twisted so does his relationship with his family, as the church group
starts taking notice of Wills more worldly interests. In the end Will
must stay true to himself and the film must go on.

The performances by all the children were exceptional, especially
Carter who is the movie's sparkplug and provides comic relief
frequently. As well as Didier the french exchange student who is a text
book example of how absurd the whole new wave trends of the day were,
his appearances are all wildly amusing. The movie also has a fair
amount of quirky animations and dream sequences that offer visual
pleasures for the eyes and bring childhood doodles to life. The movie
is just a brilliant little idea and it plays out so very well in all
the settings and the characters are extremely likable in all manners,
the movie should play great for almost all ages

TagsEnglandTVUK
Teeth
Day of the Dead