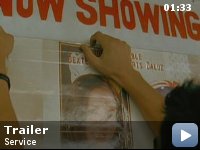 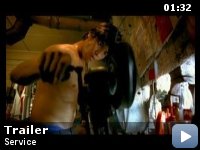 A drama that follows the travails of the Pineda family in the Filipino city of Angeles. Bigamy, unwanted pregnancy…

Storyline
A drama that follows the travails of the Pineda family in the Filipino city of Angeles. Bigamy, unwanted pregnancy, possible incest and bothersome skin irritations are all part of their daily challenges, but the real "star" of the show is an enormous, dilapidated movie theater that doubles as family business and living space. At one time a prestige establishment, the theater now runs porn double bills and serves as a meeting ground for hustlers of every conceivable persuasion. The film captures the sordid, fetid atmosphere, interweaving various family subplots with the comings and goings of customers, thieves and even a runaway goat while enveloping the viewer in a maelstrom of sound, noise and continuous motion.

Taglines:
Service. It's the family business.

Life in a "Family" theater.


A dilapidated Filipino movie theater is the star of this film, but it's
not a dark, haunted place like the cinema of Tsai Ming-liang's austere
Goodbye, Dragon Inn. Located in the city of Angeles in the Philippines,
this one, only partly ironically called "Family," is active, in fact
overactive, and holes in walls leave it open to invasions from goats
and its lower floor is exposed to the noises of a busy street crammed
with pedestrians, motorcycles, cars, and trucks at all hours.

Events happen on a "Wednesday (the day for the novena to the Mother of
Perpetual Help) in October (month-long feast of Our Lady of the
Rosary)"–I'm quoting from the distributor's material. The rather regal
Nanay Flor (Gina Pareno) has filed a bigamy case against her estranged
husband Tatay Edwinand goes to court to see the years-long case finally
decided. Alan (Coco Martin) is a young man upstairs who paints busty
nudes on the wall; he's the one who has a boil on his bum. He has sex
with his girlfriend Merly (Mercedes Cabral) and has just learned to his
dismay that she is pregnant. Nayda (Jacky Jose), who mans the theater
while Nanay For is at court, is married but drawn to her cousin Ronald,
who is also in the building. She sees to having the right movie posters
up, and argues with her husband, Lando, on the phone, because Mr. El
Lobo, the soft drink distributor, has to be paid. Lando (Julio Diaz)
mans the little restaurant, not always successfully; a young man cheats
him out of 30 pesos and he can't get it back. There is another brother,
Ronald (Kristopher King). There's also a little bespectacled schoolboy,
Jonas, who's good in math. The things he sees! Nanay Flor says that
they had three theaters, but have had to close the other two because
they weren't making money, and this one is failing.

Nanay Flor loses the case, and to her disappointment her youngest son,
Jerome (Dan Alvaro) testifies against her. She is further distressed to
learn that the film rentals are going up. Serbis is replete with actual
details of this kind, and even shows Alan delivering reels to a bus and
picking up the new ones for the week.

Excitement happens when a purse-snatcher tries to take refuge in the
theater but customers, the family, and cops all chase him. The lights
go on exposing the many "serbis" boys 'in flagrante.' When the thief is
caught the lights go down, the film resumes, and the "serbis" boys are
back to work. At another point a small white goat has escaped into the
theater and appears just below the screen. Another chase. To recover
from her horrible day, Nanay Flor takes a bath in the shoddy bathroom
(the Gent's is flooded), grooms herself and dresses in black, and goes
down to the ticket window facing out, ready for anything.

After symbolically popping his boil, Alan has impulsively packed a bag
and run away. way.

Carlo Tabije and Benjamin Padero deserve notice for their set designs
(the field in which Mendoza got his start); Odyssey Flores'
cinematography is rough at times, but effective. The processing gives
the images too edgy a look at times. The lighting isn't bad, but there
is way too much street noise, and those who argue the whole production
is exploitive and crude aren't far off the mark, but the depiction of a
family isn't without interest, though this has none of the poetry and
mood of other films about the devolution of a place.

This is as if a Third World 'telenovela,' with X-rated sex added, was
all crammed into a single comprehensive 90-minute episode. It's an
impressive achievement, but a little bit indigestible. Mendoza's
earlier film 'Foster Child' received an ovation at the previous Cannes
festival. He has produced something sui generis this time and it would
appear that there is life in the Filipino film industry.