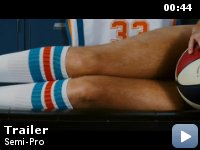 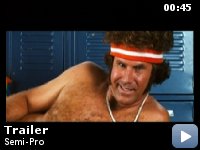 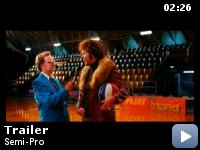 Storyline
Three men, three dreams. It's 1976 in Flint, Michigan. Jackie Moon's American Basketball Association team languishes in last place, with few fans in the seats. Jackie dreams of a merger with the NBA. A tough-minded point guard named Monix is at the end of his career; he's played on the champion Celtics but accepts a trade to Flint to be close to Lynn, the love of his life. Clarence "Coffee" Brown dreams of stardom: he's the Tropics' best player, but he's a hotdog who doesn't value teamwork. When the trio learns that a merger is in the works that won't include the Tropics, they pull the team together to try to achieve the impossible. Can dreams come true in Flint?

Taglines:
The Greatest Fro on Earth

The narrator for the Shasta Apple soda commercial is Tom Bosley of
Happy Days fame. We see the commercial during the on court brawl.

Factual errors:
The San Antonio Spurs are portrayed as the best team in the league finishing in first place. During the 1975-76 ABA Season when the movie took place, the Spurs finished third in the standings. When the regular season ended that year, the best record in the league belonged to the Denver Nuggets.

Monix:
Vakidis, open the window will ya?

Vakidis:
Yes, right on!
[does nothing]


One of the joys of being a university student is getting invited to
free sneak previews. I went to one last night, where the front half of
the theater was packed with students while the back was filled with
members of the writing team, taking careful notes on which jokes we did
and did not laugh at. For the most part, the reaction was positive, and
the jokes that failed miserably will probably get edited out by the
time the movie officially opens.

The highlight, of course, was Will Ferrel meeting the 70s. I myself was
not alive in the 70s, so I only know about the culture through the
disco-funk lens of caricature cinema. Ferrel is one funky mofo so he
thrives. I would say this was one of his better efforts, topping
Taladega nights, Elf, and the ice skating one. It's not as good as
Anchorman, mainly because it's just not as quotable.

In short, if you like Will Ferrel, or 70s funk (the soundtrack is hella
dope), see this movie.