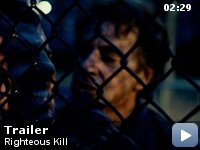 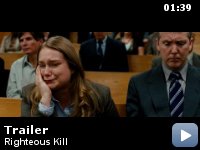 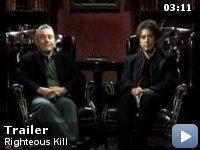 Storyline
Turk and Rooster, two aging NYPD detectives who have been longtime partners are faced with a serial killer who is murdering sociopathic criminals. They both have personal issues, and when they start working with a younger team, Perez and Riley, tensions between the pairs of partners is inevitable, especially since Turk is now living with Perez's ex-girlfriend, also a homicide detective.

Taglines:
The most acclaimed actors of our time in the film event of the year.

In the first movie where Al Pacino and Robert De Niro starred together,
The Godfather: Part II, they both played gangsters. In their second movie
Heat, Pacino was a cop, and DeNiro was a gangster. In this, their third movie together, they are both cops. This is also the first movie where they have extended interaction. They never shared a scene in
The Godfather: Part II and in
Heat they only had two scenes.

Audio/visual unsynchronized:
After they handcuff Spider to the vault door, Rooster puts his gun in his face, and you hear the gun cock. He's holding a Glock, which has an internal hammer, and can only be cocked by pulling back the slide.

Turk:
Where are you going?

Rooster:
I dunno. To hell, I suppose.

Robert DeNiro and Al Pacino, actors of the most classic and memorable films now do a mediocre thriller


Righteous Kill is one of those films that a lot of people have just
been looking forward too because it has two of the greatest actors of
our generation, Robert DeNiro and Al Pacino. I must add how I love in a
lot of the TV ad's they're saying this is their first film together,
true, it's the first time they are real co-stars together, but they've
had two films already. Anyways, back onto the film, Robert and Al are
both incredible actors, we know that, Robert is actually my favorite
actor, so naturally I was looking forward to seeing this movie, I hate
to say this, oh, man, I hate to say this, but this film was an utter
disappointment. I'm not saying this was a bad movie, but this was a sad
and very predictable thriller that could have been done with more
average actors, Al and Robert are above this script and don't pull in
their best performances due to that. The story is very mediocre
compared to some of these terrific actors who looked so bored
throughout the move.

Turk and Rooster are partners on the police force, having experienced
over 30 years of constant bad guys going free, seeing the innocent's
blood shed, and all the injustice in the world, they've almost lost it.
Suddenly, there are murders involving the criminals they have arrested,
along with younger officers, they try to figure out what is going on,
but when one of the cops brings up that it might be a vigilante
situation, Turk and Rooster are hesitant. Maybe they're hiding some
secrets of their own.

Righteous Kill, don't get me wrong, it's worth the look, especially to
see these cinematic legends on screen together, but like I said, for
the script they were given, this was way too average and they are above
it. I even hate to say it, this was very predictable if you've seen a
lot of these thriller movies of today. Not to mention, I think Al
Pacino, this must have been his third movie where he has worn that same
leather jacket, I mean is it just me, or does anyone else notice this?
Over all, it's not a bad movie, but it could have just been done with
average actors, instead of all the hype that has been around it because
of the actors. Just don't be fooled, it's a typical thriller, nothing
special, I suggest waiting for the rental.