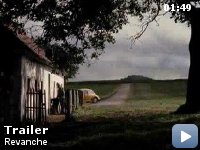 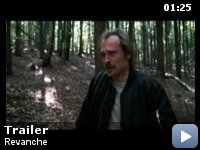 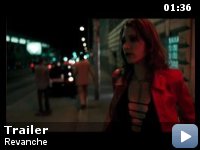 Ex-con Alex plans to flee to the South with his girl after a robbery. But something terrible happens and revenge seems inevitable.

Storyline
Ex-con Alex dreams about starting a new life with the Ukrainian prostitute Tamara. To do so, he wants to rob a bank erasing debts and making the flight towards the South possible. But Tamara is unintentionally shot on the escape by the coincidentally present policeman, Robert. Alex flees to the farm of his grandfather and learns that Robert lives close by…thoughts of revenge start to arise.

Taglines:
Whose fault is it if life doesn't go your way? [US release]

The literal English translation of the title is 'revenge', but it also has another meaning of 'second chance'. If you play a game against someone and lose, you can ask for 'revanche', another game/ chance to beat your opponent.

The Bauer at the brothel, the peasant and the prostitute


Revanche. Written and directed by Götz Spielmann. The look of the film
is thoroughly authentic, and the Austrian milieu very convincing.
Johannes Krisch is fabulous as Alex, the peasant brute with a broken
heart and an uncontrollable sex drive. Andreas Lust is very good as
well, as Robert, Alex's police officer nemesis. Caught in the middle is
Ursula Strauss, who plays Susanne, Robert's wife.


The story starts out in the squalid world of Viennese prostitution, at
a tacky brothel on the periphery. Alex works for the local prostitution
boss and he has fallen in love with one of the Eastern European
streetwalkers, Tamara, played by Irina Potapenko. When Tamara is
recruited for a promotion to call-girl, she decides instead to run away
with Alex. Here the story moves to the countryside where Alex's father
lives in a miserable cabin on the outskirts of modern Austrian society.
But if the surrounding become simpler, the interaction does not, as
Alex becomes entangled in the lives of the small town police office and
his wife.

The film is satisfying on many levels. It is a veritable ethnographic
study of the interface between post-modern Central European human
trafficking and pre-industrial Austrian bauern culture. Alex and his
father speak to each other in what has been described to me as a rich
and authentic peasant dialect rarely represented in film. Not only does
it look and sound authentic, but the story makes perfect sense, too.
And that's saying a lot for a European "written and directed by" film,
where narrative logic doesn't often get more than cursory
consideration. The name "revanche" has a double meaning in German, both
revenge and a return match or a second chance, and it seems that both
of these ideas are being developed throughout the story, as characters
juggle their need to get even with their desire to secure their own
futures. The tragic consequences of their every action lead them
further and further down a path not of their own choosing. We get a
taste of this feeling of predestination when the camera stops still at
a forested point in the road, a spot that will take on fatal
significance later in the story. Yet, if fate controls the characters'
destinies, it is the strength of willpower that will decide who
survives and who will fade into insignificance.

Revanche did not get nominated in any categories for the EFA awards in
2008, but it is Austria's entry for the Oscar Foreign Language film
nomination in 2009.