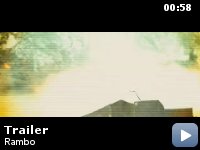 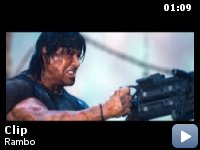 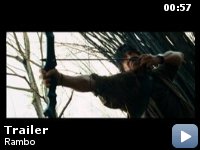 In Thailand, John Rambo joins a group of mercenaries to venture into war-torn Burma, and rescue a group of Christian aid workers who were kidnapped by the ruthless local infantry unit.

Storyline
Vietnam veteran John Rambo has survived many harrowing ordeals in his lifetime and has since withdrawn into a simple and secluded existence in Thailand, where he spends his time capturing snakes for local entertainers, and chauffeuring locals in his old PT boat. Even though he is looking to avoid trouble, trouble has a way of finding him: a group of Christian human rights missionaries, led by Michael Burnett and Sarah Miller, approach Rambo with the desire to rent his boat to travel up the river to Burma. For over fifty years, Burma has been a war zone. The Karen people of the region, who consist of peasants and farmers, have endured brutally oppressive rule from the murderous Burmese military and have been struggling for survival every single day. After some inner contemplation, Rambo accepts the offer and takes Michael, Sarah, and the rest of the missionaries up the river. When the missionaries finally arrive at the Karen village…

Julie Benz was cast as Sarah because Sylvester Stallone was a big fan of the TV show
Dexter in which she stars.

Continuity:
At the military camp where the prisoners are held, it rains all night. The next morning, when everyone leaves the camp, the ground is dry – even dusty.

John J. Rambo:
They would have raped her 50 times, and cut her f***ing heads off.

Rambo is back and better than ever!


I saw this at an advance screening in Oslo, and going in, I didn't
expect it to be any more than a cheesy and somewhat gory tribute to
eighties actioners by a star/director/producer/writer who was desperate
to relive past glory. That latter may or may not be true, but my former
assessment was plain wrong. This movie is authentic, shocking and
unlike any other comparable movie.


Given its genre, the movie is a masterpiece. The story is simple but
solid, and works on several levels. The action scenes are unparalleled,
more intense than "Black Hawk Down", "Saving Private Ryan" and
"Stalingrad" put together. The level of brutality and gore will shock
and fascinate, and no doubt cause some level of controversy.

Stallone proves himself to be an excellent director, as well as in
excellent shape for his age. I had little faith in him going in, and I
stand corrected.

This is a Rambo who has come to terms with who and what he is, in a
movie that holds up when compared with the original "First Blood". Well
done, Sly. Well done indeed.