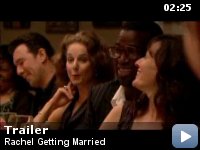 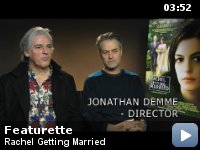 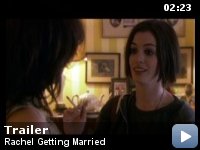 A young woman who has been in and out from rehab for the past 10 years returns home for the weekend for her sister's wedding.

Storyline
Kym is released from rehab for a few days so she can go home to attend her sister Rachel's wedding. The home environment is always challenging for a recovering addict, no less so when the visit if only for a few days. While the sisters feel genuine affection for one another, there is tension in their relationship. Rachel feels that her father dotes on Kym far too much and Kym is upset to learn that Rachel has selected a friend to be her maid of honor. Their father is genuinely concerned about Kym's well-being but doesn't see the stress the relationship is causing. Both women also have to deal with their selfish mother who is clearly more concerned with her own well-being ahead of that of her children. Underlying the family's dynamic is a tragedy that occurred many years previously and for which Kym is held by some to be responsible.

There is no pre-recorded background scene music throughout the film. All music heard in the film is performed live on screen.

Continuity:
When Kym and Rachel are talking as Rachel is trying on her dress, Rachel bends down to the floor and her arm disappears from the shot, in the next shot Rachel's side is visible again as if she had stood up instantly.

Kym:
You're a lawyer?

Kieran:
Was. For about five minutes.


In every actor's career there comes a moment where the critics and
audiences rally around jumping for joy about how they've just witnessed
a breakthrough performance. As stunning as these performances are, the
term "breakthrough" always felt a little out of place to me since it's
only on rare occasions the actor in question is relatively new. Most
times they are people who have been pounding the boards and scraping
the screen for years. In those terms, the breakthrough is nothing more
than a large group of people seeing that actor in a new light for the
first time, mostly in something they never imagined before. Now the
newly colored spotlight falls on Anne Hathaway and her powerful turn as
Kym in Rachel's Getting Married.


The film is a slice of life piece detailing a small space of time, only
a few days, where Kym returns home from a rehab clinic just in time for
her sister Rachel's wedding. Anyone who has ever taken part in
arranging a wedding, especially one taking place in the family home,
knows the extreme stress already present, so toss a young, partially
unstable girl into the mix and top it off with a nice coating of family
denial and dark skeletons in the hallway closet, then you get the full
picture of this film. Relationships are strained, ties pulled so tight
and taut they could snap and still they try to work it out through
screaming, laughing and crying (not necessarily in that order). After
all, it's about a wedding, who's not happy at those? Before giving Anne
her due credit, let me shed some light on someone most people won't
know off the top of their heads. Rosemarie DeWitt plays the title role
of Rachel and she does it with the utmost tenderness and subtlety. What
she brings across is the inherent hatred, resentment and unending
compassion sisters can feel for each other, even through the worst of
storms. With a film more comfortable in the category of "ensemble
piece", Rosemarie is the catalyst and pushes the energy along, changing
and charging every one of her scenes. But the light shines brightest on
Anne Hathaway as Kym, the ex-junkie, ex-alcoholic, ex-return rehab
patient bordering on becoming an ex-family member. Audiences claim this
as a breakthrough performance because they fell in love with Anne in
The Princess Diaries movies, Ella Enchanted and the wonderfully wicked
The Devil Wears Prada. Yet what they might not remember is she's played
rougher, tougher roles in Havoc and Brokeback Mountain, showing the
more mature and adult side of her skills. So I wasn't all that shocked
to witness the brilliance she brought to this film, but I will
celebrate it all the same. Anne jumps in and exposes a vulnerability, a
cavern of pain and lost love, which drives the emotional core of the
picture. From opening credits to the closing moment, she is the
elephant in the room everyone must deal with and the magical point is
this is the first time where the audience can begin to empathize with
the elephant and not the onlookers. I can't end the acting portion of
this review without bringing up Bill Irwin and Debra Winger as well.
Bill plays her father and churns out a tenderness only an accomplished
actor such as himself could generate. There are such small moments,
such tiny fractures in his facade which allow you to peer into the
heart of a man trying to choose between his greatest love and his
greatest loss. On the other side, Debra Winger plays her mother, who
has chosen to block out the pain in her past and skate by the rest of
her life, allowing the blackness and hurt to fester and suffocate any
chance at a real connection with her daughters. As you can read, the
acting on display here is sensational and will undoubtedly be
remembered during awards season.

As a total film, I'm not sure the story reaches the same heights. A lot
of great scenes and spectacular moments are created, but the story
lacks cohesion. A particular subplot about the family and its deep love
for music is mentioned and referred to over and over, but never fully
explained or explored, which weighs down later scenes during the
wedding celebration and the overlong musical sequences. During most of
the musical moments, all I really wanted was to get back to the story,
back to the family and to Kym. Also, the connection between Rosemarie
and her soon-to-be husband Sydney (played by Tunde Adebimpe) never
quite comes across. There is a wonderful moment during their wedding
vows, but it could have been helped even more if their relationship had
been more centered earlier on.

On the directing front, Jonathan Demme, with the assistance of a
touchingly tender script from Jenny Lumet, helps craft a reality we can
all believe in, a home we can all feel we've been to before. Much of
this intimacy and nuance came from the free form style of camera
movement, with the actors never knowing where and when the camera was
going to appear on them. Everyone was basically playing everything from
the moment he yelled action, so there were emotional surprises around
every pan of the camera. That technique gave the movie a certain level
of improv or even documentary feeling, like the audience was the most
silent of voyeurs.

Recommendation: A powerful series of moments, filled with terrific
acting, that don't quite come together as a film. Certainly has great
value to witness, but the theater experience might not be necessary.
Also, this really is meant for those viewers not afraid to open
themselves up to it.