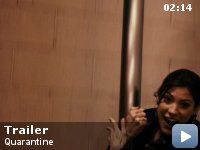 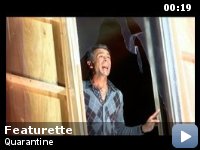 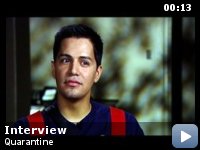 A television reporter and her cameraman are trapped inside a building quarantined by the CDC after the outbreak of a mysterious virus which turns humans into bloodthirsty killers.

Storyline
Television reporter Angela Vidal and her cameraman are assigned to spend the night shift with a Los Angeles Fire Station. After a routine 911 call takes them to a small apartment building, they find police officers already on the scene in response to blood curdling screams coming from one of the apartment units. They soon learn that a woman living in the building has been infected by something unknown. After a few of the residents are viciously attacked, they try to escape with the news crew in tow, only to find that the CDC has quarantined the building. Phones, internet, televisions and cell phone access have been cut-off, and officials are not relaying information to those locked inside. When the quarantine is finally lifted, the only evidence of what took place is the news crew's videotape.

Taglines:
On March 11 2008, the government sealed off an apartment complex in Los Angeles. The residents were never seen again. No details. No witnesses. No evidence. Until now.

Was not screened for US critics.

Incorrectly regarded as goofs:
Power to the building has been cut, yet the elevator still works. One character briefly mentioned that the building has a back-up generator, most likely to assist evacuation during emergencies. A pre-programmed back-up system explains why the elevator stops at each floor, and why the doors take so long to close.

Griffin:
[camera is on him in the shower]
You know, I hope that's a wide-angle lens.

Solid Remake, but the original "Rec" was far superior…


Quarantine is a remake of 2007 Spanish horror film Rec, which has been
receiving amazing reviews from horror fans, including myself. It was
tense, terrifying and had great acting. I only saw Rec a few months
ago, and would say it's one of the best of the year. Hearing about a US
remake so soon, especially one told to be shot-for-shot, was kind of
ridiculous. However, the cast for Quarantine was good, the trailer and
stills looked cool, so I thought I'd give it a watch to see how it
holds up to Rec. Needless to say, Rec was better, but I still enjoyed
Quarantine. It was better than the remakes of Shutter, The Eye and One
Missed Call, that's for sure.

Plot basically tells the story about a young woman who is filming with
her cameraman at a fire station in Los Angeles, when they receive a
distress call from an apartment. They head out, soon make a horrifying
discovery regarding one of the residents and find themselves
Quarantined by the government in the apartment building. It's exactly
the same plot as the original, but it isn't actually shot-for-shot as
there are a few new scenes thrown in there. Good ones, though. The
acting was also strong, with Jennifer Carpenter being the lead. Manuela
Velaso was better in Rec, but Jennifer did a really good job. I was
surprised at the lack of Johnathon Schaech's screen time though,
considering he was in nearly every scene in the recent remake of Prom
Night. I loved Dania Ramirez and Jay Hernandez too.

Quarantine has really good acting, is entertaining from start to the
end, but it has it's flaws. The movie was actually a little slow in one
or two parts, and some of the characters I didn't really care for, such
as the cocky businessman. I am also rather annoyed by the lack of
effort from the writer/directors of this film. Drew and John Dowdle are
rather new to the business, and not only have they remade a film that
is less than a year old, but the direction and writing just wasn't
there. They took most of the screenplay from Rec, so if anyone deserves
the writing credit, the original makers deserve most of it. The
direction, well, was also lacking…because it's a POV movie and a lot
of shots are similar to the original, so the guy clearly didn't do as
much as a regular director because it's a POV remake. They have also
lied to the audiences, saying that they changed the ending. So they are
new to the business, remaking a film less than a year old and lying?
Stupid. I feel that the actors, and the creators of the original Rec,
made this film what it was. The only things the Dowdle brothers deserve
credit for are for their new scenes (5-10 mins total, which probably
took an hour or two to write) and well, assisting with some of the
direction…oh, and also managing to collect huge paychecks for doing
very little of what a normal writer/director would do.

Overall, Quarantine was an entertaining remake after some of the lame
ones we've had this year. It's nowhere near as bad as the haters are
thinking it is, which actually doesn't make much sense, because if they
loved the original…why hate a shot-for-shot remake? Unless it's
because it has American actors, which again wouldn't make sense, as
they are very talented actors. If you dislike POV movies though, this
movie won't really be for you, so don't be an idiot and go and see it,
and then complain about feeling sick…it's your own fault! Rec was the
superior film, but overall, Quarantine was a good remake. But like I
said before, if anyone deserves the credit for this remake, it's the
original writer/directors (for the shots, writing and original – this
remake wouldn't be here without them) and the actors of this remake. I
do advise you though, don't be ignorant over a movie with subtitles,
and check out the original Rec. It really is an amazing film.