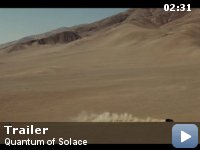 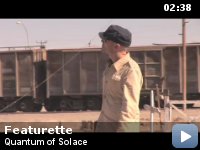 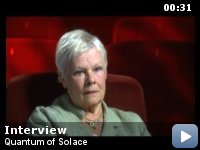 Seeking revenge for the death of his love, secret agent James Bond sets out to stop an environmentalist from taking control of a country's valuable resource.

Storyline
Is there solace in revenge? Bond and "M" sniff a shadowy international network of power and corruption reaping billions. As Bond pursues the agents of an assassination attempt on "M," all roads lead to Dominic Greene, a world-renowned developer of green technology. Greene, a nasty piece of work, is intent on securing a barren area of Bolivia in exchange for assisting a strongman stage a coup there. The CIA looks the other way, and only Bond, with help from a retired spy and from a mysterious beauty, stands in Greene's way. "M" wonders if she can trust Bond, or if vengeance possesses him. Beyond that, can anyone drawn to Bond live to tell the tale?

Something is not quite right with this latest Bond offering


This film is about James Bond cracking down a multi-national
corporation that works with dictators to get a share of precious
natural resources.

"Quantum Of Solace" has an impressive opening sequence. It has high
speed car chases with lots of collision and gunshots. The ultra short
scenes (all under one second each) and the shaky camera gives urgency
and thrill, but it is so hard to actually work out what is happening.

There is a lot of action and adrenaline in the film, but the plot seems
not to have a focus. Nor does it make sense either, as it feels like an
all-action-no-information film. All Bond does is to run around the
globe after his target, and viewers are left to wonder how he made it.
I don't find myself caring for the plot or the characters. I don't know
why this happens, but something is not right with the film and I don't
know what.