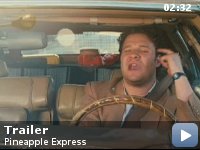 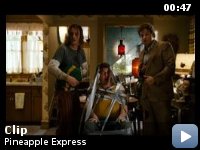 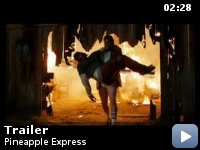 A process server and his marijuana dealer wind up on the run from hitmen and a corrupt police officer after he witness his dealer's boss murder a competitor while trying to serve papers on him.

Storyline
Lazy court-process clerk and stoner Dale Denton has only one reason to visit his equally lazy dealer Saul Silver: to purchase weed, specifically, a rare new strain called Pineapple Express. But when Dale becomes the only witness to a murder by a crooked cop and the city's most dangerous drug lord, he panics and dumps his roach of Pineapple Express at the scene. Dale now has another reason to visit Saul: to find out if the weed is so rare that it can be traced back to him–and it is. As Dale and Saul run for their lives, they quickly discover that they're not suffering from weed-fueled paranoia: incredibly, the bad guys really are hot on their trail and trying to figure out the fastest way to kill them both. All aboard the Pineapple Express.

Taglines:
One hit could ruin your whole day.

Shipped to some theaters under the title "Easy Job".

Incorrectly regarded as goofs:
Budlofsky and Matheson have never seen Saul, nor has Saul seen Budlofsky or Matheson before they see each other at the retirement home, so they shouldn't recognize each other. However, if Saul knows he is being chased by dangerous criminals, it stands to reason that he would panic upon seeing two unidentified men speaking to his grandmother. His reaction to seeing the two men attracts their attention and they correctly surmise that he is the man they're after.

Saul:
[getting ready to smoke cross joint]
Okay here's what you do. You equip yourself…


I was not interested in seeing this movie as I thought it would be a
stupid teen story. My daughter went with her older cousins, she is only
16 and since the theater had strict security I was forced to go in as
her guardian. I am 46 years old and I laughed the whole entire movie.
By the end I was laughing SO hard that I could not take it anymore. I
think I laughed more than the kids. There were so many laugh out loud
scenes and the interaction between the characters was pure gold.It
really took me back to my younger days-so for you older people this is
really one movie you do not want to miss. Be sure to go to the bathroom
before because this is definitely one of those pee in your pants
movies.