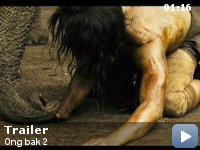 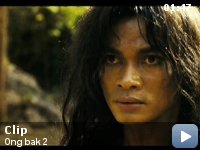 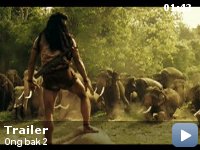 A young Thai boxer learns the skills and inner meaning of martial arts.

Storyline
In 1431, the Kingdom of Ayutthayan conquers the territory of Sukhothai expanding their lands to the East. The noble Lord Siha Decho is betrayed by his Captain, Rajasena, and is murdered together with his wife. However their son Tien is saved by one loyal soldier and left alone in the woods…

The Cambodia scenes has been cut out from the original version due to recent clashes between Cambodian and Thailand over the Preah Vihear temple.

Chernang:
[Repeated line]
Your life depends on you.

Jaa is Back in Fine Form


I saw this film last night here in Bangkok and I am pleased to relate
that, despite all the alleged problems during production, Tony Jaa has
delivered a very impressive film with a strong, mystical narrative;
uniformly high production values; and, most importantly for a martial
arts film, brilliantly conceived and choreographed action sequences.
Despite its title, "Ong Bak 2" bears but a tenuous relationship to the
earlier Jaa film, being an historical semi-epic set during the era of
Ayutthayan imperial expansion (though, without wanting to give too much
away, the closing sequence does suggest this new film can be regarded
as a prequel of sorts, while also setting up the grounds for further
entries to come), but it does explore similar thematic terrain as "Ong
Bak" in terms of cultural identity and conflict, familial
disintegration and revenge, and Buddhist spirituality. "Ong Bak 2" is a
bigger film in every sense of the word, allegedly costing in excess of
300 million baht, and the money is easy to see on the screen with very
impressive set design and costuming, and stunning cinematography. Jaa
is terrific in the film: despite his incredible action scenes and lithe
mobility, he projects a serene stillness through his character of Tien
that gives the film a strong emotional anchor. As befits the type of
mythic figure he is playing, he doesn't have a lot of dialogue but Jaa
is essentially a physical performer, the Gene Kelly or Fred Astaire of
contemporary action cinema, and he expresses himself with assured
eloquence through his body and face. Indeed, in relation to the latter,
while one expects corporeal proficiency and grace from Jaa, it's worth
noting what extraordinary use he makes of his eyes in this film to
convey a wide range of emotions. He really is a major talent and I do
hope the producers at Sahamongkol realize what an asset he is to Thai
cinema and start treating him with the artistic respect he deserves.

My only slight criticism is that the film doesn't quite develop its
central characters and plot lines fully enough. There's a certain cool
distance about the film: it looks a visual treat and is a veritable
masterwork in intricately choreographed martial arts film-making but,
with the exception of one or two scenes, we never quite gain a
sufficient handle on the main characters or come to identify with them
and their plights all that deeply. It's clear that the producers are
aiming to use this film as a base for further sequels and I can't help
but wonder if they strategically held back some narrative material for
use in the next film. Nevertheless, this is a minor qualification and
doesn't detract from what really is a terrific film all round. Given
the negative press surrounding its production, I had concerns that "Ong
Bak 2" might not come together but Jaa and the team have pulled off a
very impressive effort, indeed, that deserves to do well not only here
in Thailand but in overseas markets as well.

TagsGermanyThailand
Rise of the Footsoldier
The Children