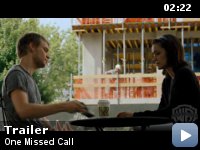 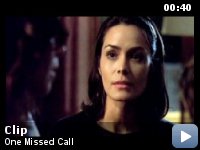 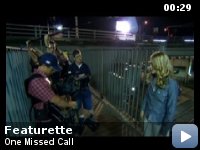 In this remake of the Japanese horror film "Chakushin Ari" (2003), several people start receiving voice-mails from their future selves — messages which include the date, time, and some of the details of their deaths.

Storyline
After the death of their friend Shelley, Leann Cole receives a voice mail from the future of the date and time when she would die. On the scheduled day, Leann sees weird things and in the precise informed hour, Leann is attacked by a supernatural force on a footbridge over a train station while talking to her friend Beth Raymond. Beth meets Leann's boyfriend Brian, who also received a call, and witnesses his death on the street. When her roommate Taylor Anthony receives a call, Beth befriends Det. Jack Andrews, who tells her that his sister was the first victim of the phone call. They decide to investigate the connections of Jack's sister and find the name of Marie Layton, who apparently abused of her daughters. Jack and Beth run against time trying to save Beth from her fate.

Taglines:
What will it sound like when you die?

Guillermo del Toro was offered the chance to direct, but turned it down to work on
Hellboy II: The Golden Army.

Continuity:
When Beth is in the crawl space under the hospital, she holds her flashlight sideways, casting light on the wall on her left. When they cut to show what she sees as she is crawling, the beam of light is cast in front of her. The scene cuts back and forth between the 2 views, making the mistake very visible.

Beth Raymond:
[to Leann about Shelley Baum's funeral]
Hey. How was it?

Leann Cole:
It was a funeral. It sucked.

Leann Cole:
From now on, I only go to parties where no one gets cremated.

Beth Raymond:
How are Shelley's parents?

Leann Cole:
Considering their 24-year-old daughter drowned in the backyard pond. They're great.

Beth Raymond:
And you?

Leann Cole:
I knew Shelley. We interned at Saint Luke's together. I mean, she was not crazy.

Beth Raymond:
I know but the way she was talking at the end was pretty…


Awful, absolutely awful. Had free tickets, but still, I knew better. Of
course, all the clichés you'd expect, dumb young adults, scares that
come from someone jumping into the screen and sound effects that go
"boom" simultaneously, and the build up to when suddenly the main
character is the one in eminent danger. Quick cuts of "scary" images.
Did I mention the "creepy" music that lets you know when the mood
should be tense? Now, add to that a premise that goes beyond the bad
premises of other movies in the genre. Possessed cell phones? Or is it
possessed ghosts that have to travel through cell lines? Oh man. The
crowd I saw it with erupted with laughter numerous times at crucial
plot points.


Download that game "snake" for your cellphone, it's a lot scarier.

TagsGeorgia USA
2:22
In the Name of the King: A Dungeon Siege Tale