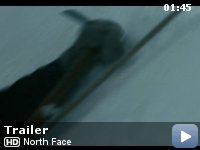 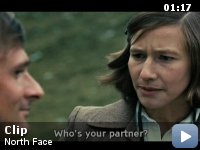 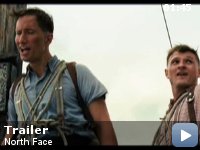 Based on a true story, North Face is a suspenseful adventure film about a competition to climb the most dangerous rock face in the Alps…

Storyline
Based on a true story, North Face is a suspenseful adventure film about a competition to climb the most dangerous rock face in the Alps. Set in 1936, as Nazi propaganda urges the nation's Alpinists to conquer the unclimbed north face of the Swiss massif – the Eiger – two reluctant German climbers begin their daring ascent.

As Luise Fellner and her boss, Herr Arau, arrive at the Eiger, the local guides are standing in front of the hotel advertising their services to the tourists. One of the guides notices a pair of climbers in the crowd. "Look who's coming," he says, "Bartolo Sandri and Mario Menti." A fellow guide mutters: "Another couple of fools. Come in a train and leave in a coffin." These two Italian climbers fell to their deaths from the north face June 21, 1938.

Errors made by characters (possibly deliberate errors by the filmmakers):
At the beginning of the film, when Luisa watches the news in the cinema theater, the voice-over gets the first-names of the alpinists who died on the Eiger wrong. It says Max Mehringer and Karl Sedlmayr, but it's the opposite: KARL Mehringer and MAX Sedlmayr. This may have been intended to show the unreliability of the report.

Luise Fellner:
[voiceover]
When you're at the bottom – Toni once told me – at the foot of the wall, and you look up, you ask yourself: How can anyone climb that? Why would anyone even want to? But hours later when you're at the top looking down, you've forgotten everything. Except the one person you promised you would come back to.


The reaction this film got at the Pusan International Film Festival
(PIFF) in Pusan, South Korea, was better than any of the other big
movies there.

This movie gets a 10 out of 10 from me. It is a harsh story about
Germany in the 30s as the Nazis were rising and wishing to prove to the
world that they were the best. The tale is about two German men who
take on a very difficult climb. The story is quite riveting, and human.
Full of laughs, tragedy, and … a little bit of a love story.

Although the movie starts a little slowly, it really picks up about one
third the way in. The main characters (the two mountain climbers and
the one female love interest) are all solid actors, well directed, and
well casted. The director did a great job at capturing the climb.
Everything was so convincingly shot, it makes you wonder if they
actually filmed some of it on a real mountain. I suppose they must have
used CGI, but it was used so sparingly and realistically that it must
be commended. The contrast between the plight of the mountain climbers
and that of the rich bystanders makes the movie so much more
emotionally riveting. Some people in the audience cried.

This is a tragedy that must be seen. It captures humanity at its best
and worst… and shows us that sometimes nature rules our lives, and
that it is not forgiving.

Overall, I felt this movie was a small masterpiece. One that will
probably not be seen by many. But for those who do, you will get a very
special treat…

It was especially amazing to know that you, as the viewer, had more
than a telescope to watch this climb with… unlike the bystanders in
the movie, we were able to see more than just the ascent and the final
moment. We saw the part that mattered the most: the climb.

Mesrine: Killer Instinct
Let the Right One In