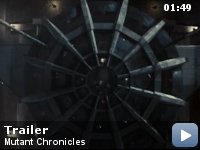 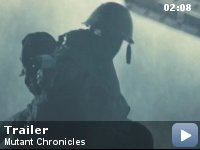 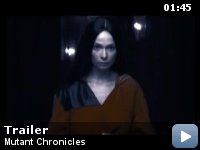 Storyline
At the end of the Ice Age, The Machine came from outer space with the purpose to change men into mutants. However, a hero defeated the device and a great seal was laid over The Machine. In 2707, the depleted world is ruled by four Corporations: Mishima, Bauhaus, Capitol and Imperial that are in a constant state of war. During a battle between Capitol and Bauhaus, the great seal is broken and The Machine works again transforming soldiers and civilians into hordes of mutants. A small part of the population escapes to Mars, leaving millions of people behind. The man of faith and leader of an ancient brotherhood, Brother Samuel, is a believer in God and the Chronicles, a bible about the mutants from ancient times. With the city besieged by the mutants, he visits the Corporations' leader Constantine, asking for an aircraft and twenty men for a suicide mission to destroy The Machine, planting a bomb and a detonator following the knowledge of the Chronicles…

Taglines:
The 23rd Century. The Darkest Age Has Come.

Continuity:
The bead on the radar drastically changes position from one shot to the next, when the team's transport is being attacked by the mutant flown civilian craft.

Lord Of The Rings… In the future… With less walking. And story.


I watched this film because Ron Perlman's in it and i'm always buoyed
by seeing a man who looks like a gorilla act so well. I had no idea
it's based on some kind of role-playing franchise, and frankly, i'm
glad i didn't. To be honest i probably wouldn't have watched it if i
did. After having just sat through it, i thought i should add a
positive review because well, i liked it. I was a good film. The Mutant
Chronicles did kind of remind me of Lord Of The Rings (bite your lips
fanboys) because it got the plot out of the way pretty early on and the
rest of the film was essentially spent trying to achieve the one
valiant act that will save the day/world. Whereas LOTR is spread out
over nine hours of character development (boy howdy are they noble,
eh?) and beautiful scenery, The Mutant Chronicles chooses the less
trodden path of gunfire, disposable characters and mutants. The film
takes place in 2127 in a dystopian future where two of the four
corporations who run the world accidentally let loose an ancient evil
into the world. Cue some wacky bloodthirsty mutants overrunning the
general population and generally being a nuisance. As the rich
survivors escape to Mars, a small group of nihilistic ass-kickers and
religious nuts travel to the centre of the Earth to stop the
catastrophe, showcasing an amazingly short grieving process along the
way. Just about every location is computer generated. Rather well i
thought, though i know there are those who strongly disagree. The
shortcomings of the CGI are helped along by a very dark look and feel
with a fairly monochrome palette being preferred with the exceptions of
some reds and blues (think Sin City). The Mutant Chronicles may well be
a minor stylistic triumph, not letting itself get bogged down in plot,
character development and all that important stuff. It seems as though
the film makers settled on making it a pretty cool movie. And it is.


TagsEnglandUK
The Sisterhood of the Traveling Pants 2
Make It Happen