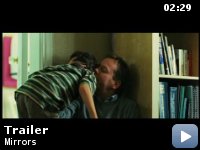 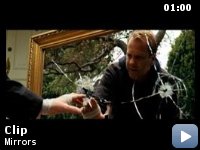 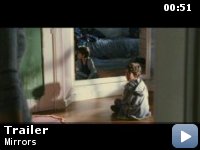 An ex-cop and his family are the target of an evil force that is using mirrors as a gateway into their home.

Storyline
In New York, the former NYPD detective Ben Carson is hired to work as night watch of the remains of the Mayflower Department Store that was partially destroyed by fire many years ago. Ben became alcoholic and was retired from the police force after killing a man in a shooting. His marriage was also destroyed and now he is living in the apartment of his younger sister Angie. However he has not been drinking for three months and sees the employment as a chance to rebuild his life. When he goes to the rounds in his first night, he finds that the mirrors are impeccably clean and his colleague explains that the former night watch was obsessed by the mirrors. After a couple of nights, Ben sees weird images in the mirrors, but due to the lack of credibility of his past, his ex-wife Amy believes he has hallucinations as a side effect of his medication. When Angie is found brutally murdered in her bathtub…

Taglines:
There Is Evil……..On The Other Side

Paula Patton was cast because director Alexandre Aja and producer Grégory Levasseur had previously considered her for their production
P2.

Plot holes:
When Ben sees his sister reflected in the rear-view mirror, he removes the rear view mirror but not the side-view mirrors.

Mirrors: much better than you'd expect of a horror remake!

Mirrors was pretty much doomed for terrible critical reviews from the
start. Horror never scores big with film critics; in fact I can't
remember the last horror film that got more positive reviews than
negative. If the horror film in question is a remake, especially of a
foreign movie, it's almost destined for critical failure. There's a
reason for that: most horror remakes are utter garbage and are solely
created so studios can make a quick buck. However, once in a while, a
horror film remake will come along that actually isn't half bad, yet
will still suffer negative reviews based on the fact that it's a horror
film remake. It happened several years ago with The Texas Chainsaw
Massacre and more recently, with The Hills Have Eyes.

Mirrors has suffered a similar fate. Directed by French horror director
Alexandre Aja, the same man behind The Hills Have Eyes, Mirrors is a
remake of a Korean horror film, as well as the best wide-release horror
film of the year thus far. While I'll admit I probably enjoyed the film
much more than most will, it's still miles better than the critic's
lousy reviews or lackluster promotion would have you believe.

Kiefer Sutherland stars as Ben Carson, an ex-cop suffering from
emotional issues after a "workplace accident" and a messy divorce. Sick
of sleeping on his sister's couch, he takes up a job as a security
guard at an abandoned department store that was devastated by a fire
many years back. The job seems easy enough, primarily consisting of
walking through the building every couple hours, making sure there are
no trespassers. Things take a turn for the worse though, after several
strange encounters involving the mirrors in the building, and Ben
begins to find that his own reflection is haunting him, not only at the
job, but in any mirror or reflective object (or liquid) he comes
across. Soon enough, Ben find his life, as well as his families, in
danger.

Mirrors biggest strength is the storyline, easily one of the best
horror premises to hit the screen in years (even if it is recycled).
Reflections are practically inescapable, not only appearing just in
mirrors, but in doorknobs, windows and water. The inescapability of
reflections is what makes the idea of one's reflection out to get them
so chilling. They're everywhere. You can't escape them. Not since
Nightmare on Elm Street, where ones own dreams were the cause of death,
has there been a supernatural premise that has gotten so much under my
skin. The fact that whatever the mirror images do to themselves happens
to their real life counterparts, only heightens the hopelessness of
Carson and his family.

Alexandre Aja has already proved his ability to create genuine scares
with previous films, but most have been of the brutal, violent kind, as
opposed to the atmospheric chills usually employed in supernatural
horror movies that are more reliant on the mood and feeling than
shocking acts of brutality for scares. Surprisingly, Aja's penchant for
gore and violence complements the film surprisingly well. The sequences
inside the derelict department store at night build up suspense very
well, utilizing the eerie location with corpses manifesting themselves
within the mirrors and screams emitting from within deep recesses of
the building. It's fairly generic stuff for movies like this, but Aja
is talented enough stylistically to pull them off. However, it's the
sequences where Aja really lets loose that prove to be the most
frightening. One sequence that takes place in a bathtub ends up being
one of the most brutal and unsettling death scenes of the year. There
are several of these sequences sprinkled throughout the film and they
are extremely effective, utilizing a combination of brutality and
atmospheric suspense that are, at the least, shocking. When a ghost
pops out in one scene, it isn't a pale, long black haired Asian woman,
nor a semi-transparent floating apparition: it's a half-naked female
with half her body burned off, the flesh still sizzling off her burnt
carcass as she wails in pain. That's the difference between Mirrors and
most other ghost films.

The biggest downfall of the film is when it tries to provide an
explanation for the horrific events taking place in the second half.
The idea of one's image terrorizing oneself is horrifying on one level,
but at the same time, it's extremely unrealistic. Trying to explain why
this happened back fires on the film, as no explanation is going to
make sense and instead, will just draw attention to the fact that this
would never happen in real life, destroying a bit of the film's effect.
The audience doesn't need to know why this happens. Ambiguity in this
case would be much more frightening and wouldn't take away from any of
the other scares. Once you throw in a sub-plot about mental institution
experiments and haunting tragedies taking place in the building, you
lose a lot of the suspense. Despite the unwise direction the movie
takes in its second half, it's still entertaining and manages to retain
a few good scares here and there, while finally rebounding in the last
act.

Mirrors isn't perfect (what film is?), but its strengths far outweigh
its weaknesses and in the end, it's the most enjoyable wide-release
horror film of the year (although personally, the only other decent
wide-release horror film this year would be The Strangers). Benefiting
from a brilliant premise and the unlikely combination of French
director Alexandre Aja's love of blood and brutality with an
atmospheric, supernatural storyline, Mirrors is definitely much better
than what one would expect of a typical Korean horror movie remake, let
alone any horror movie that hits theaters.