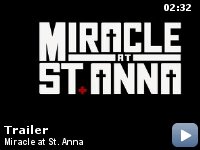 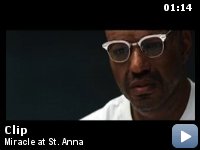 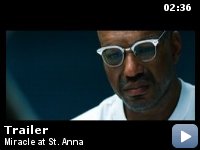 Set in 1944 Italy, the story of four black American soldiers who get trapped in a Tuscan village during WWII.

Storyline
Christmas, 1983. A New York postal clerk, a Buffalo Soldier in Italy in World War II, shoots a stranger. In his apartment, police find a valuable Italian marble head, missing since the war. Flashbacks tell the story of four Black soldiers who cross Tuscany's Serchio River, dodging German and friendly fire. With a shell-shocked boy in tow, they reach the village of Colognora. Orders via radio tell them to capture a German soldier for questioning about a counteroffensive. In the village, a beautiful woman, partisans that include a traitor and a local legend, the boy, and the story of a recent massacre connect to the postal worker's anguish forty years later. And the miracle?

Taglines:
World War II Has Its Heroes And Its Miracles.

Wesley Snipes was originally cast in the film, but was forced to drop out due to pending tax-evasion charges.

Anachronisms:
Many of the German soldiers carry K98k rifles that are missing sight hoods and cleaning rods. These parts being missing indicate that the weapons were likely captured and stripped down by the Soviets during or after the war. A rifle in German service would have these parts.

Sergeant Bishop Cummings:
Well, he don't seem to like pretty a whole helluva lot either.


Endless, unbearable. Italian actors overacting shamelessly and Spike
Lee losing track of his own talents. The self indulgence mixed with the
confusion made this "epic" one of the most difficult films to sit
through in long, long time. During my visit to Los Angeles I was
invited to a few screenings but this one was the one I longed for.
Terrible let down. It's been a long time since "Do The Right Thing" and
I have the feeling that it has to do with Spike Lee's vision of himself
as a filmmaker. There is a lack of humility that blurs everything he
does and "Miracle At St Anna" is a perfect example of that. In a way
"The Inside Man", his genre commercial outing, was more honest and
disciplined than anything his done of late. I can't imagine this film
making any money so maybe Mr Lee will have the space to reflect. I
certainly hope so because I'm sure he still has some aces up his
sleeve.