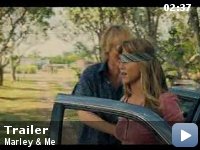 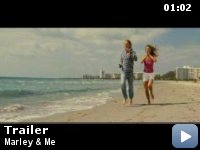 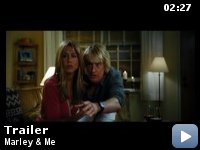 A family learns important life lessons from their adorable, but naughty and neurotic dog.

Storyline
After their wedding, newspaper writers John and Jennifer Grogan move to Florida. In an attempt to stall Jennifer's "biological clock", John gives her a puppy. While the puppy Marley grows into a 100 pound dog, he loses none of his puppy energy or rambunctiousness. Meanwhile, Marley gains no self-discipline. Marley's antics give John rich material for his newspaper column. As the Grogans mature and have children of their own, Marley continues to test everyone's patience by acting like the world's most impulsive dog.

Taglines:
Their relationship wasn't going anywhere until one little thing tied it all together.

John Grogan:
A dog doesn't care if you're rich or poor, educated or illiterate, clever or dull. Give him your heart and he will give you his.

More than "A Man and His Dog" film


After reading some of the outlandish bad reviews, I had to comment on
this film. I know people's perceptions differ, but some of the bad
reviews are so exaggerated and are, lack of a better word, incorrect! I
was hesitant about going to see just another generic man and dog film.
It was my girlfriend's idea, and I figured it would be another corny
chick flick about how a couple get a dog and how it brings them
together. After I began watching, it grabbed my attention and never let
go! I don't think my review of this film will be able to capture the
true essence and emotions this film captures, but here goes: The film
was very gripping in its realistic portrayal of the development of a
family and their pet from the couple's wedding until the film's end
approximately 40 years into their lives. I think for most people, the
couple's relationship and even a troublesome pet will seem
familiar(imperfect, but yet believable). The movie isn't solely about
the dog, but how the dog is a bit of a nuisance at first, but matures
along with the family. Giving many more details may ruin the story, so
I'll hit some of the points that need attention.

Some people argue that this film lacks comedy, but it's subtle
comedy(the type real life offers…nothing exaggerated and
unbelievable…like too many Seth Rogan films). Owen Wilson is more
toned down, but he adds his spin to a more down-to-earth role as a
husband that chooses his life as a husband over the dream life he had
pictured. Aniston delivers one of her best performances, in my opinion.
I'm not a big fan of her acting, but she gives an undeniably good
performance as Wilson's adoring wife.

Regarding the "nudity" and "sex", yes they hint at having sex, but
nothing is shown nor sounds like sex. There is NO NUDITY!!! There is a
shot of Aniston's naked BACK(not her backside, her back). All of the
film's sexual innuendos are while they are married! If anything I think
this sends a positive message to younger viewers that this is the way
it's supposed to be…fun isn't over after marriage and in some cases,
it's when the real adventure begins. Children these days have seen
worse than this film shows on network TV and MTV. I didn't hear any bad
language that isn't on TV already. It wasn't what most people consider
the worst words. And lastly, the sad part of the film is realistic not
morbid, murder, or uncalled for…sometimes I think people are so used
to films like The Dark Knight that when they see a wholesome, realistic
film they're disappointed because they're wanting something epic.

Give this film and chance and realize going into it that it's not the
mindless, idealistic comedy that Hollywood has stuffed down our throats
lately. It's heart-warming, wholesome, and true to life.