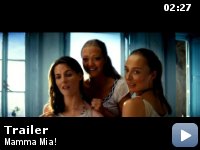 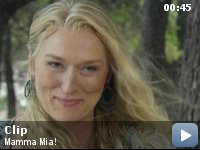 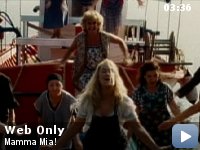 The story of a bride-to-be trying to find her real father told using hit songs by the popular '70s group ABBA.

Storyline
Set on a colorful Greek island, the plot serves as a background for a wealth of ABBA songs. A young woman about to be married discovers that any one of three men could be her father. She invites all three to the wedding without telling her mother, Donna, who was once the lead singer of Donna and the Dynamos. In the meantime, Donna has invited her backup singers, Rosie and Tanya.

Taglines:
The Music. The Romance. The Movie

The stage play first opened in London on April, 6th, 1999, at the Prince Edward theater. Its North American debut was May 23rd, 2000, at Toronto's Royal Alexandra Theatre. The original Toronto cast then started Mamma Mia!'s pre-Broadway tour in San Francisco, Los Angeles, and Chicago. During the Chicago performances, Louise Pitre and Tina Maddigan were invited to play their same roles in the original Broadway cast. The Broadway opening directed by Phyllida Lloyd, was October 18th, 2001, at the Winter Garden Theater, the former home of "Cats". The play was nominated by the 2002 Tony Awards for Best Musical and Best Book; Pitre was nominated for Best Actress in a Musical. By January 2010, the play had exceeded 3400 performances on Broadway, and is the twelfth longest running Boradway show ever (2010). As of April 2007, Mamma Mia! has open productions in: New York, London, Las Vegas, Madrid, Moscow, Stuttgart, Fukuoka, Gothenburg, and Essen. The US and International touring companies have performed in cities all over the globe, including Melbourne, Australia, Utrecht, The Netherlands, and Copenhagen and Horsens, Denmark. According to Variety, the play's original producer and writer "were broke when they first tried to put the show together and were even snubbed by the Swedish pop group whose music formed the basis for the show. They are now two of the wealthiest women in England."

Continuity:
In "Does Your Mother Know", Tanya enters the bar barefoot, and her shoes are visible in her bag. In the next dance scene, she's wearing the shoes.

Sam Carmichael:
[while Donna and the Dynamos are singing "Super Trouper"]
Our song!


Went to see Mamma Mia without particularly high expectations. Not being
a big connoisseur (or even fan) of musicals, I didn't really know what
to expect. Though I adore ABBA, I never bothered to watch the stage
production of Mamma Mia. But having a cinema membership, I didn't have
much to lose (no money, at least), so I went for it. And boy, am I glad
that I did! I can safely say that I enjoyed every second of it. And I'm
not even ashamed to admit it!


Give Meryl Streep another Oscar and get it over with already. If she
could get a nod for the Devil Wears Prada, she definitely deserves one
for this. She really let her hair down on this one. Mrs. Streep can
obviously not pass for a trained singer, but somehow, it just doesn't
seem to matter. It just really worked in the movie (unlike -say- Helena
Bonham Carter's singing in Sweeney Todd). When I heard Meryl's
rendition of "The winner takes it all" in advance, it lowered my
expectations considerably, but in its context, it totally made sense.

Most of all though, this movie was just sheer fun. People were
clapping, laughing…Rarely have I seen an audience as enthusiastic.
The crowd especially responded well to Meryl and her two cronies
(arguably the strongholds of the movie). Also, because I had never seen
the musical before, I was amazed (and amused) at the inventive ways in
which they managed to incorporate so many ABBA-songs. Equally brilliant
was the way the extras (usually some Greek old women) were deployed
throughout the movie…And then of course the setting (beautiful
Greece) was mesmerizing…

Basically, Mamma Mia is a superb musical that doesn't take itself too
seriously. If you're just a little bit crazy and want to have a good
laugh, if you love ABBA, want to see Meryl Streep like you've never
seen her before or if you simply have a secret crush on Colin Firth
and/or Pierce Brosnan (his singing was nothing short of hilarious), you
will LOVE this movie. Best summer flick so far. Warmly recommended.