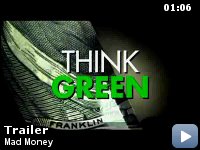 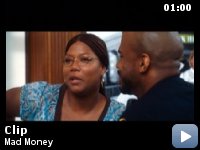 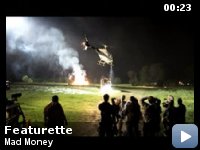 Three female employees of the Federal Reserve plot to steal money that is about to be destroyed.

Storyline
Don and Bridget Cardigan's upper middle class lifestyle is threatened since Don, who has been out of work for a year, seems to have given up looking for a job, and housewife Bridget has been out of the workforce for most of her life. They are close to $300,000 in debt. Finding out this information, Bridget comes to the conclusion that she needs to get a job – any job – that at least provides them with some benefits. She reluctantly takes a job as a janitor at the Federal Reserve Bank of Kansas City. Almost immediately, Bridget is enthralled with all the old worn out money that is being shredded. She comes up with a plan to get her old lifestyle back by stealing much of that money, which she believes is an easy job since the locks used on the money carts are standard equipment and as she notices that no one ever checks the garbage as she goes about her work. Her plan needs the cooperation of one person who works the shredder and one person who pushes the carts of money…

Taglines:
On January 18th, get mad. Get very mad with money.

Factual errors:
When currency is destroyed at a Federal Reserve, it is carefully accounted for: serial number, denomination, and destroy date.

Glover:
Everyone, everywhere, every minute.

I thought it was cute


My friend and I were looking for a movie to see this weekend and Mad
Money was the only movie that looked like fun. When we finished the
movie, the audience was happy and we were happy, this was a fun and
cute movie. So I have to say that I am very very surprised by this
harsh rating on IMDb, I mean, a 4.4?! You have got to be kidding me,
this is by no means movie of the year, but for what it was, this was
just a fun comedy to watch. There wasn't any major problems with this
movie that deserves that kind of a rating that makes it look like the
first major flop of the year. Diane Keaton, Queen Latifah, and Katie
Holmes were absolutely adorable together and had great chemistry. They
made the story an Oceans Eleven for the girls, sounds like such a chick
flick, but I think this is one that most could actually enjoy.

Bridget and her husband, Dan are in major debt, really bad debt, like
282,000 dollars in debt. They are about to loose everything they own,
so Bridget gets a job as a janitor for the financial bank. When she
notices the ultimate torture of how they shred worn out money, she gets
a clever idea with the help of two other girl employees, Nina and
Jackie, to find a way to break the system and get that money to get out
of their poor situations. Once they get what they need, Bridget is so
satisfied with how smooth everything went, she wants more and they go
for it, but they should learn not to get so greedy since someone is on
their tale.

Mad Money is a chick flick, but it's one of the rare one's that I
liked. I didn't think there was anything wrong with this film. I think
they could have explained the situation with the boss of the bank a
little better, I don't know if he was in on it or what, but it's
something that could slide I think. Queen Latifah was just so funny and
Diane Keaton was a perfect choice for Bridget, Katie Holmes was pretty
decent for the comic relief. Please don't take the rating on IMDb
seriously, I think that Mad Money was just a fun little comedy that
deserves a better chance.