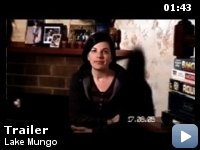 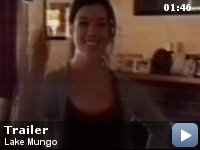 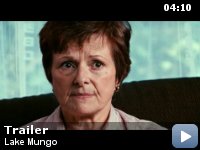 A supernatural drama about grief.

Storyline
Sixteen-year-old ALICE PALMER drowns while swimming in the local dam. When her body is recovered and a verdict of accidental death returned, her grieving family buries her. The family then experiences a series of strange and inexplicable events centered in and around their home. Profoundly unsettled, the Palmers seek the help of psychic and parapsychologist, RAY KEMENY. Ray discovers that Alice led a secret, double life. A series of clues lead the family to Lake Mungo where Alice's secret past emerges. Lake Mungo is a mystery, a thriller and a ghost story.

Factual errors:
The story takes place in December of 2005. In an interview with the grandparents of the victim, she says "the autopsy was performed on the Monday the 27th." and that the "coroner released the body on Tuesday the 28th." In fact, the 26th of December was the Monday and Tuesday was the 27th.

The best of the trendy Horror "Mockumentaries"


After "Blair Witch Project" the scary "mocumentary" business went
through the roof. Ten years later, the trend is still going strong,
with at least a couple dozen films with the same concept of hand-held
terror. "Lake Mungo" is by far the best since "Blair Witch". It
accomplishes much more than this year's other big effort, "Paranormal
Activity", which, I found rather tame at best. Played almost as a
television news special, "Lake Mungo" is the most believable entry thus
far. The downplayed, monotone performances of the actors is very
effective. The naturalism they maintain only adds more edge and anxiety
to the story. And speaking of story, unlike most of the other first
person horror movies, "Lake Mungo" actually has a good one. It's an
honest mystery, full of secrets and lies, wrapped around a paranormal
thriller. It has enough twists, turns and enough surprises/scares to
keep anyone's attention. Rarely have I experienced so many chills in
one sitting. Don't wait for the Hollywood re-make already in the works,
there's no need, the Australians got it right the first time (unlike
you, Hollywood.) Don't miss one of the best horror films of 2009.