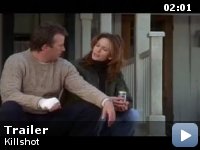 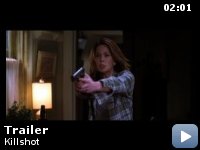 Beautiful Carmen Colson and her ironworker husband Wayne are placed in the Federal Witness Protection program after witnessing an "incident". Thinking they are at last safe, they are targeted by an experienced hit man and a psychopathic young upstart killer. The ensuing struggle will test Carmen to the limit.

Storyline
Beautiful Carmen Colson and her ironworker husband Wayne are placed in the Federal Witness Protection program after witnessing an extortion scheme go wrong. Thinking they are at last safe, they are targeted by an experienced intimidating hit man and a psychopathic young upstart killer. The ensuing struggle will test Carmen to the limit.

Taglines:
Yesterday she was a witness. Today she's a target.

The release date changed several times because the film has undergone a series of re-shoots after it's original completion date in January 2006.

Factual errors:
When Wayne is working on the barge he is not wearing a Type II flotation vest as required by US Coast Guard while in motion and working.

[towards end of film]

Wayne Colson:
Look, honey, just hear me out. I drove 400 miles. And 15 years to think about this. And a lot about what you've said lately. You're right, five's not a good number. It's terrible. So let's try six. And if we can make it to six, then we can try for seven.

Despite it's flaws, "Killshot" is not a total dead loss.

MICKEY Rourke's intense and interesting performance as a troubled
hit-man lifts this structurally flawed adaptation of Elmore Leonard's
gritty crime novel. Directed by John Madden ("Shakespeare in Love"),
the film is never as much fun as the book, which was a violent, witty
and richly enjoyable slice of ultra-sleazy pulp fiction. But, despite
all it's fault (the movie was completed in 2006, but is only being
released now), "Killshot" is not a total dead loss and is likely to be
enjoyed by genre fans who approach it with low expectations.
Oscar-nominee Rourke ("The Wrestler") plays Armand "The Blackbird"
Degas ,a veteran, half Indian hit-man for the Toronto mob who slays his
boss's girlfriend during a hit. Returning to the rural area where he
was raised, he pairs up with dim-witted young psychopath Richie Nix
(Joseph Gordon-Levitt). Then, when, when the lovely Carmen Colson (a
sexy, effective Diane Lane) sees Armand's face during a botched crime,
he decides she must die. And the chase is on. "Killshot is a rather
messy film that shows evidence of post-production edits and re-shoots,
but Armand, Carmen and Richie are classic Leonard characters, there're
one or two good shoot-outs and at least the films retains some of the
master crime writer's wonderful trademark dialogue. Nice scenery too.
As a Leonard fanatic, I wouldn't have missed the chance to see this on
the big screen for anything (it's been given a national cinema release
in South Africa – not a huge one, but way bigger than five screens in
Phoenix ). I wasn't expecting much, so I certainly was not
disappointed. Quite a bit of the book comes through and although
Gordon-Levitt – usually one of my favourite young actors – sometimes
goes to far over the top, the supporting cast is pretty good. Thomas
Jane and (a totally miscast) Rosario Dawson have some nice moments and
there's a cool cameo by the great Hal Holbrook . However, the
interaction between Armand and Carmen Colson is nowhere near as
intriguing as in the book (perhaps this has something to do with the
notorious Weinstein scissors) and even though the picture has been
pruned to 84 minutes it still drags in the second half. Reading Elmore
Leonard's website the other night, I noticed that the maestro has seen
the film (apparently a 100-minute cut) and seems to have enjoyed it,
which tells us something. This flawed, but watchable (there's a good
film lurking in there somewhere) movie should have been released to
more cinemas in the States. Sadly, it doesn't look as if that's going
to happen, but I can tell you one thing. It's going to be a solid
renter when it hits DVD. Hopefully the distributor will release both
this 84-minute cut and a longer version on disc. And let's hope we get
to see Johnny Knoxville's deleted scenes, and a director commentary.
But I suppose it will only come out in a vanilla version shorn of
special features.

PS. Drop the score down to 5/10 for the DVD – I've now seen the (South
African release)DVD which in the 1.78 aspect ration ratio rather than
2.35.1 and looks shoddy compared to how it looked on the big screen.
The film really falls to pieces on a second viewing.