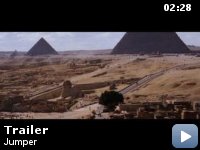 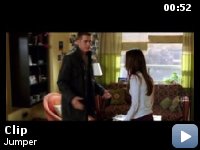 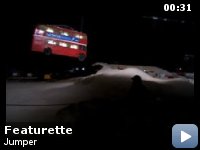 A genetic anomaly allows a young man to teleport himself anywhere. He discovers this gift has existed for centuries and finds himself in a war that has been raging for thousands of years between "Jumpers" and those who have sworn to kill them.

Storyline
David Rice is a high school student in Ann Arbor, abandoned by his mother at five, enamored with Millie, a fellow student, and picked on by at least one classmate. On a winter's day, while about to drown, he discovers he can transport himself instantaneously to anyplace on earth. He leaves town, goes to New York City, robs a bank vault, and comes to the attention of a shadowy group of government hunters. Eight years later, the hunters, led by the murderous Roland, get a fix on David. He heads home, searches out Millie, invites her to travel with him, and only later realizes that Roland and his crew are seriously deadly. Is everyone close to David in danger?

Eminem reportedly turned down an offer to star in the lead role. But an MTV report quoted director Doug Liman saying that his plan to have Eminem in the movie was dropped right after he met Hayden Christensen.

David Rice:
Let me tell you about my day so far. Coffee in Paris, surfed the Maldives, took a little nap on Kilimanjaro. Oh, yeah, I got digits from this Polish chick in Rio. And then I jumped back for the final quarter of the N.B.A. finals – courtside of course. And all that was before lunch. I could go on, but all I'm saying is, I'm standing on top of the world.

To me, there's an important message hidden in this film. I feel that
the makers of this film wanted to deliver a message. In this genre of
film, almost all the "gifted" individuals turned out to be some
superhero or saviour of mankind. Like Superman, Spiderman, Batman,
Daredevil, X-men, Fantastic 4.. just to name a few.

But the question is, if we really got these super-human powers, who
will actually sacrifice it all for the good of man kind? This is the
message the makers of Jumper is trying deliver to the audiences. The
guy in this film, without giving too much away, is nothing but a
selfish prick. All the things he does with his power is for himself, no
one else.

To me, the most meaningful scene in this film, is the few seconds when
he watched the News of TV, saw a bunch of people get caught in flood,
and then emotionlessly turned it off.

He could have gone and saved those people, and become a stereo-type
hero. But he didn't. He got superpower, he use it to enjoy life. It's
that simple.

But isn't it what we would all do, if we got his power? This ain't an
Oscar winning film, but it got a clear and simple message. Which I
believe allows it to beat all superhero films, simply because it's more
realistic.