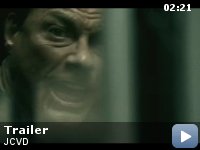 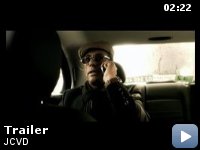 Between his tax problems and his legal battle with his wife for the custody of his daughter, these are…

Storyline
Between his tax problems and his legal battle with his wife for the custody of his daughter, these are hard times for the action movie star who finds that even Steven Seagal has pinched a role from him! In JCVD, Jean-Claude Van Damme returns to the country of his birth to seek the peace and tranquility he can no longer enjoy in the United States.

Taglines:
The biggest fight of his life

In the opening intro scene, Jean-Claude Van Damme's comment about not being able to film in one shot was his own ad-lib, partly in response to Mabrouk El Mechri actually wanting to shoot the scene in one shot.

Errors made by characters (possibly deliberate errors by the filmmakers):
In the scene where the two guys talk about movies in the Video-store the one claims that Stallone fought against Arabs in "Rambo 3". But actually in "Rambo 3" John Rambo was fighting FOR Arabs in Afghanistan and against the "bad" Russian troops.


I went into J.C.V.D with all the prepubescent memories of the action
heroes of yesteryear; nostalgic roundhouse kicks, horrible dialogue,
overdone explosions, one-liners and all. A time where the movie
industry churned out the same movie a hundred different ways with the
likes of Schwarzenegger, Stalone, and Van Damme in the spotlight. These
action movies seem set aside from Hollywood history, not as bad films
per say but as their own separate entity where critics and nay-sayers
alike had no power to quell the insatiable appetite of young movie
goers. A time where this trinity of subpar actors ruled the box offices
with their muscles and gun toting charisma. Not that I was expecting
J.C.V.D to be one of these films, but it is almost impossible not to be
reminded of the better days of mindless entertainment when the film's
title is the initials of the King of High Kicking, Jean Claude Van
Damme. I was expecting something I have never seen before, something of
a reinvention of an American, French, or more importantly, world icon.
Which is exactly what I got.

J.C.V.D. is not a Jean Claude Van Damme movie whatsoever, no more than
its namesake. There are no drawn out fight scenes, no car chases, and
certainly no bad one-liners. Instead, the film is a hybrid, a
meta-film, going beyond documentary, mocumentary, or full blown
narrative. If I were to categorize it as anything, it would be a
documentary of a mocumentary since it isn't afraid to break the fourth
wall and does so on many occasions. The narrative is broken up,
flipping back and forth if not only for the element of short lived
mystery. It is not a character study since Van Damme is almost too well
known for that, rather it is reenactment of his life dramatized for
Hollywood. It doesn't matter if the story is true or not, the important
thing is that Van Damme makes it real. Obviously drawing from his real
life experiences, he pours his heart into his cinematic counterpart and
proves to the world that he can flex his acting muscles just as well as
he can flex his biceps, if not better now in his old age. Van Damme
humanizes himself in a way that we have never seen. In a power and
telling scene where Van Damme literally is lifted above the fourth
wall, he explains to the camera his inglorious life and career, full or
mistakes, drugs, and heartbreak. It brings a heart to those action
films of yesteryear, of a past where things were simpler and a present
where retrospection, as well as introspection, only leads to heartache.

This film speaks about the power of the celebrity and the quick to
judge public. It brings to light the blood thirsty court system once it
has a celebrity to make it famous. And it shows that not all of these
superstars are the personalities we see on film. That they are normal
people thrust into extraordinary situations with nothing to do but
buckle under the pressure of the public. But beyond the serious nature
of J.C.V.D. there are plenty of easter eggs to be found for those pure
action fan boys. References to all of his previous work and signature
high kicks are spread throughout the film that give it it's humor while
the performances and solid writing attribute to many laughs as well.

The opening sequence of J.C.V.D. perfectly captures the message it is
broadcasting to our time. It features an action sequence where Van
Damme is out of breath and sloppily taking out soldiers while the stunt
men and actors alike exhibit their heartless effort for a pay check in
the film industry while the director throws darts at a picture of
Hollywood. It lacks all the magic of his work while accentuating the
cheesiness to a point where the fake film is a mirror image of the
action industry today. And as Van Damme tries to catch his breath and
lobby for a better film, he can only walk away in disgust of what his
beloved career has become. J.C.V.D. is a film that knows what it is and
what it is trying to say. Yet it somehow goes beyond that to become
something more. It breaks down and then raises up one of the most
famous action stars of all time only to show him in one of his best
roles. Himself. It is not a tribute to those days gone by where I would
rent six Van Damme movies and watch the rest of the afternoon away, it
is more. It is a fun, funny, entertaining, and a damn good film. One
thing is for sure, I will never look at Van Damme the same way again,
and that is a great thing.