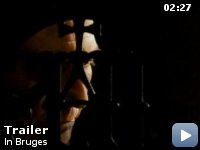 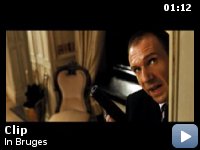 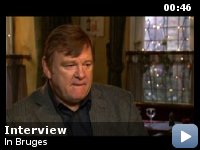 Guilt-stricken after a job gone wrong, hitman Ray and his partner await orders from their ruthless boss in Bruges, Belgium, the last place in the world Ray wants to be.

Storyline
London based hit men Ray and Ken are told by their boss Harry Waters to lay low in Bruges, Belgium for up to two weeks following their latest hit, which resulted in the death of an innocent bystander. Harry will be in touch with further instructions. While they wait for Harry's call, Ken, following Harry's advice, takes in the sights of the medieval city with great appreciation. But the charms of Bruges are lost on the simpler Ray, who is already despondent over the innocent death, especially as it was his first job. Things change for Ray when he meets Chloe, part of a film crew shooting a movie starring an American dwarf named Jimmy. When Harry's instructions arrive, Ken, for who the job is directed, isn't sure if he can carry out the new job, especially as he has gained a new appreciation of life from his stay in the fairytale Bruges. While Ken waits for the inevitable arrival into Bruges of an angry Harry…

When Ray refers to the dwarf in
Time Bandits, he is thinking of actor David Rappaport, who committed suicide in 1990.

Continuity:
When Ray is preparing for his date with Chloe and is checking himself in the mirror, he is trying to decide whether to leave his top button open or button it. He decides to button it, then turns to Ken for approval and the camera cuts to a different angle. You can see in his reflection in the mirror that his top button is open. When he faces the mirror again and the screen cuts back, it is buttoned again.

Ray:
After I killed him, I dropped the gun in the Thames, washed the residue off me hands in the bathroom of a Burger King, and walked home to await instructions. Shortly thereafter the instructions came through – "Get the fuck out of London, you dumb fucks. Get to Bruges." I didn't even know where Bruges fucking was.
[pause]

Ray:
It's in Belgium.

A Breath of Fresh Air: Review from Sundance


For those who might not know the name, director Martin McDonagh is an
Irish playwright who won the Oscar last year for his short film "Six
Shooter" about a chance encounter on a train, and that film's star
Brendan Gleeson has returned as Ken, one of two hit men sent to the
medieval city of Bruges in Belgium along with his partner Ray (Colin
Farrell) to rest and lay low after a hit gone horribly wrong. Ray is a
miserable bastard who makes it clear he's not happy about being in
Bruges, but Ken convinces him that their boss Harry has a job for them
there, as well as allowing them a chance for some sightseeing, none of
which improves Ray's mood. Things look up when he meets the beautiful
local woman Chloe, played by French actress Clémence Poésy–you may
remember her as Fleur Delacore in Harry Potter and the Goblet of
Fire–and scores himself a date, which also goes horribly wrong due to
Ray shooting off his big mouth. From there things continue to go south
as Ray and Ken get into all sorts of messes and meet strange
characters, all of whom will play a part in the larger picture.

There aren't too many non-Belgian films set in Belgium, and Bruges is a
beautiful but odd place to set an entire movie. You'll probably learn
more about the place than you ever need to know as Ken narrates their
sightseeing excursions with a few factoids about the place. The entire
first act is driven by the chemistry between Farrell and Gleason as
they deliver rapid-fire patter that reminds one of McDonagh's
background as a playwright, but it makes them as immediately endearing
as Vincent and Jules in "Pulp Fiction," allowing for an even bigger
impact as things happen to them. Our first encounter with the boys'
boss Harry is an expletive filled telegraph and an equally amusing
phone conversation with Ken, making it obvious that this is a mobster
cut from the same cloth as Ben Kingsley's Don Logan. Those who don't
recognize the voice will be thrilled when they learn who plays Harry,
because it's a pleasant surprise.

This is easily Colin Farrell's best role and performance in a long
time, one that allows him to show a lot of range, not just as the
big-mouthed prat we assume Ray to be, but also as a thoughtful man
distraught about what happened in London. Having seen the error of his
ways, he feels the need to make right, even if he hides it with a lot
of complaining and arguments, and that carries over to Gleason's Ken,
continuing his great run with McDonagh.

McDonagh has created a clever script that interweaves its small cast of
characters into an intricate crime caper that mixes humor, violence and
true heartfelt human emotions into a brilliant debut feature. Just when
you think you know where things are going, McDonagh throws a sharp
curve ball at you and then another, and another, and pretty soon, what
started as a two-handed talkie has turned into a hold-your-breath
action flick, when Harry turns up in Bruges to rectify some business
that Ken has botched. Even so, it never loses what made the first half
so charming and entertaining, because McDonagh's impressive dialogue
remains at the forefront for the extended confrontation between Ken and
Harry. The ending might be somewhat grim for some tastes going by the
lightness of what's gone before, but the way everything is tied
together makes it all worth it.

Anyone worried that Tarantino and Ritchie's best work might be behind
them, can revel in the promise of McDonagh's take on the crime-comedy
genre, as this talented filmmaker shows that "Six Shooter" was no fluke
and this movie begins what's likely to be a long and promising film
career. On top of that, if "In Bruges" doesn't end up being the
funniest and most quotable movies of the year, then it should be very
close