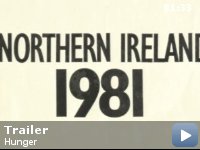 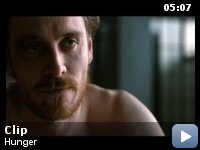 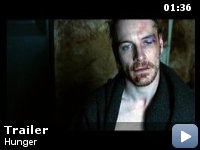 Irish republican Bobby Sands leads the inmates of a Northern Irish prison in a hunger strike.

Storyline
Hunger follows life in the Maze Prison, Northern Ireland with an interpretation of the highly emotive events surrounding the 1981 IRA Hunger Strike, led by Bobby Sands. With an epic eye for detail, the film provides a timely exploration of what happens when body and mind are pushed to the uttermost limit.

Taglines:
A compelling and unforgettable portrayal of life within the maze prison at the time of 1981 IRA hunger strike.

The second medical attendant (one with mustache) who takes care of Bobby Sands in the hospital, has a ''UDA'' tattoo on his left hand. UDA is shortening for Ulster Defence Association, a loyalist paramilitary organization in Northern Ireland.

Bobby Sands:
I always felt that thief next to Jesus got off lightly.

Father Dominic Moran:
Ah, but he recognized his sins.

Bobby Sands:
Did he though?

Bobby Sands:
When you're hung from a cross you're gonna say anything. Jesus offers him a seat next to his daddy in a place called paradise you're always gonna put your hand up and have a piece of that.

Father Dominic Moran:
Aye. Even when it's nailed to your cross.

Bobby Sand's story has been told before on screen, but never with such
raw intensity and unrelenting artistry as in Hunger. The film is
directed by Turner Prize winning artist Steve McQueen. While his art
has often been part of the film medium, this is his first entry into
feature film-making.

The film sparked both controversy and applause at this years Cannes
Film Festival, with both disgusted walkouts and rousing ovation. It the
end it landed McQueen the Camera D'or.

While the film follows the final weeks of Bobby Sand's hunger strike,
it is equally about recreating the atmosphere and conditions inside the
infamous Long Kesh Maze Prison. Its nearly a half hour into the film
before we even meet Sands, in fact. We're introduced to a prison guard,
who outside nervously checks his car for bombs, quietly avoids his
comrades, then becomes as vicious as any other when brutalizing the
inmates. We're also first introduced to a new inmate, who, as per the
IRA standard, refuses to war a uniform and instead goes simply wrapped
in a blanket. He and his cellmate smear the walls of their cells in
feces as part of the no wash protest.

Bobby is played by Michael Fassbender, who gives a quietly powerful
performance. For the film he underwent a medically supervised crash
diet, one rivaling – if not outright surpassing – that of Christian
Bale in the Machinist. He moves throughout the film with a sense of
determination and dedication.

It is difficult to go into any detail about plot, as the film more or
less moves patiently and quietly towards the inevitable. And the key
word may be quiet. McQueen claimed that he originally envisioned doing
the film dialogue free. Indeed, much of Hunger is free of dialogue.
However, McQueen, as he puts it, felt it would be more powerful to go
from vocal silence into an avalanche of dialogue. And so the films
centerpiece was born – a 20 minute stationary shot of Bobby speaking
with his Priest. In a film that is filled with a dark heaviness in a
cruel prison atmosphere, that meeting lifts a weight for a time, before
slowly descending into a sad sense of inevitability. Though that
inevitability is liberating, it is nonetheless a profoundly sad one.
The film also does not shy away from the cruelty of the British towards
the Irish, though it also does not deny the brutality of the IRA at
times – as characterized in one shocking moment. However, anyone with
any inkling of rational knowledge on the Irish struggles knows that the
IRA was never simply a terrorist organization, but a rebel group that
did from time to time employ terrorist tactics. Like all anti-state
organizations, however, the IRA did not exist for the sake of conflict,
but because of callousness and cruelty. McQueen reminds us of the
cruelty and arrogance of the British particularly through the cold
words of Margaret Thatcher, speaking shamelessly about Sands' strike.

There have been many fantastic films about the Irish Struggles, with
some of the best coming in recent years (Ken Loach's fantastic Wind
that Shakes the Barley, and Paul Greengrass's Bloody Sunday, to name
two of the better). This one, I think, may be the best. At least from
an artistic and purely visceral standpoint. McQueen captures his scenes
in jarring compositions, with all the skill and artistic imagining of a
true artist. From the opening sequences, Hunger promises something more
than just the standard. Whereas most political films focus all their
attention on the message, Hunger focuses on the feeling, and never
strays from its artistic goals. This is art, from its opening to
closing frames. It's a boldly crafted and brave film. The
cinematography and direction are assured, moving slowly and
unexpectedly, always beautifully even in its darkest and dirtiest
moments.

I believe this truly is a great masterpiece. McQueen has proved himself
as a masterful artist of film-making as well with Hunger.