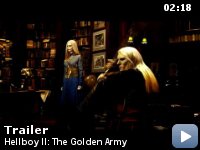 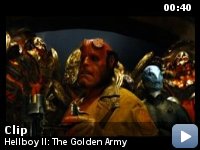 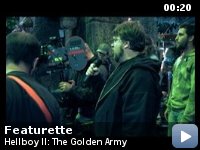 The mythical world starts a rebellion against humanity in order to rule the Earth, so Hellboy and his team must save the world from the rebellious creatures.

Storyline
In this continuation to the adventure of the demon superhero, an evil elf breaks an ancient pact between humans and creatures, as he declares war against humanity. He is on a mission to release The Golden Army, a deadly group of fighting machines that can destroy the human race. As Hell on Earth is ready to erupt, Hellboy and his crew set out to defeat the evil prince before The Golden Army can destroy humanity's existence.

Taglines:
From the visionary director of Pan's Labyrinth

Thomas Kretschmann was the first choice as the voice of Johann Kraus, but Guillermo del Toro was not satisfied with the result, and subsequently brought in Seth MacFarlane.

Revealing mistakes:
When Johann speaks German it is generally nonsense, and sometimes the grammar is incorrect.

Professor Trevor 'Broom' Bruttenholm:
My son, would you turn off that wretched puppet, and brush your teeth?

An Acquired Taste for Sure

In April 2004, the original Hellboy film took in a modest $23 million
during its opening weekend, going on in the course of its run in
theaters to gross a not so impressive $69 million estimate. The studio
felt it was not in their best interest to make a sequel. Universal
thought differently, and bought the rights. In the meantime, the B film
became a hit on DVD and cable re-runs and its director, Guillermo del
Toro, achieved auteur status (aka, A-list director) with his success
making the acclaimed "Pan's Labyrnth". Now in 2008, against all odds,
and in a rare risk for a studio, comes the sequel to this cult film
sensation.

And in the tradition of small-budget features getting the big Hollywood
treatment (ala "Terminator 2" and "Mad Max 2: The Road Warrior" two
films that benefited from larger budgets and the expanded visions of
grade-A filmmakers James Cameron and George Miller), "Hellboy 2: The
Golden Army" bests its predecessor. It takes the setup, makes it
bigger, better and louder. The film, to be sure–an eclectic medley of
self-aware humor, an over-dose of dazzling visual monsters, sets and
thrilling action, cheesy-yet-fun movie-making–is not for everyone.
It's an acquired taste; a film to either be completely loved or
entirely deplored varying on the viewer.

For anyone interested in a bizarre, unique, visual stunner of gleeful
monster madness (like me) I'd say catch this flick. For anyone else…I
might suggest you stay away.

In the first creature-feature, the story was a near laughable plot
involving Rasputin, a couple of regenerating hell-hounds, and some
other forgettable nonsense. What made "Hellboy" succeed, was the
director's visual panache and enriching vision, Ron Perlman's insta'
classic turn as the titular character, a bizarre yet beautiful set and
monster design, and a superb, hilarious dose of self-aware humor. Take
all those ingredients, and add some elements that better it, and you
have the upgraded, perfected version of what del Toro attempted to
achieve in round 1.

This time the story is better centered in its own rules and universe. A
vengeful Prince Nuada (Luke Goss) seeks three pieces to a crown that
will grant him control of the mechanized, unstoppable, indestructible
Golden Army (big, round, blade-equipped, gear-moving robots). Hellboy
(Ron Perlman) is dispatched by our government, with his usual good
humor, to protect the third piece (held by Nuada's sister, played by
Anna Walton) and hunt down the bad-guy before he completes his mission.

This works better for several reasons as a story. Nuada (played with
icy style by Goss) is a formidable villain to our hero, not the barely
glimpsed and hardly personified mere image Rasputin was. He has a plan,
a motive, and skill to be feared. Secondly, the main players Liz
Sherman (Selma Blair) and Abe Sapien (the indispensable Doug Jones, who
also does other characters) are treated more as members of Hellboy's
team; they work and operate together. This allows for more personality
to be revealed in each of them, such as a love interest for Abe in
Princess Nuada, or the domestic issues (hilarious) between Hellboy and
Liz.

Mostly though, the plot serves to offer a more enriched universe
created by Guillermo del Toro. Here is a man who turned down job offers
on "I am Legend", "Harry Potter 6" and "Wanted" (all good flicks, and
well paying jobs I imagine). He's committed to the material, and knows
what he's doing. Del Toro's precision is felt in every frame; his
perfect visual eye, sense of composition, brilliant art direction (the
film definitely gains from perfect, eye popping sets and lighting), and
engaging, well-choreographed action scenes. Pulling out all the stops,
scene-for-scene are eyes are tantalizingly overwhelmed with
interestingly created beasts and locales.

Ron Perlman still enchants as Hellboy; piercing through all those
prosthetics to deliver a performance balanced with humor, machismo,
heart ache, charm, and swagger. He fits into the character even more
comfortably than in film one. Selma Blair, who in her last outing
seemed kinda dour and flat in my opinion, gets to play up on Liz's fury
(and flames) and emotions. Doug Jones is as priceless as ever, and
given much more screen time as Abe.

Early on in the movie, Hellboy reveals his cover to the public; letting
all the world know of his existence and the existence of his fellow
'freaks'. He expects to be treated as a hero, yet is rejected for
having the appearance of a horrendous monster. The movie takes
advantage of this notion and plays out Hellboy's potential choice to
either save us all or join in with his own kind (as Nuada constantly
says he should, ala very Darth Vader, 'join the dark side'). Throw in a
hilarious drunken rendition of Barry Manelow's "I can't Smile Without
You" sung by Abe and Hellboy, and a competition for team leadership in
the form of gas-based character Johan Krauss (pricelessly voiced by
Seth Macfarlane), and you have an admirable perspective shown on
Hellboy's character: the nature, up's and down's, of being a hero. One
who does not look traditional and suffers for it.

I rate this film a 10/10, not in the same way I would rate "The
Godfather" a 10/10. I give it a perfect score for achieving what it set
out to, and being no more than what I expected: a fun, bizarre,
visually gorgeous, summer blast. 10/10