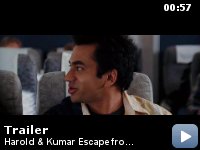 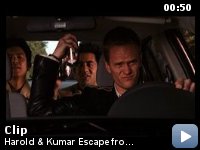 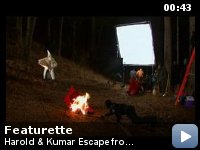 Follows the cross-country adventures of the pot-smoking duo as they try to outrun authorities who suspect them of being terrorists when they try to sneak a bong on board their flight to Amsterdam.

Storyline
The morning they return from their White Castle road trip, Harold and Kumar decide to go to Amsterdam because Harold doesn't want to wait ten days to see Maria again. On the plane, Kumar lights up his new bong, the air marshals think it's a bomb, and Harold and Kumar are arrested as terrorists and sent to Guantanamo Bay. Ordered to fellate a guard, they manage to escape, make their way to Florida, and head for Texas to find Kumar's ex-girlfriend's fiancé, the well-connected Colton, and get him to intercede with Washington on their behalf. Kumar still has a thing for Vanessa, the feds are in hot pursuit, and the legal weed of Amsterdam seems a long way away.

Taglines:
What would NPH do?

Crew or equipment visible:
About midway through the movie, before Harold and Kumar spot the the two KKK members in the forest and right after Kumar's fantasy sex scene, when they are walking through the dark forest, you can see something metallic clearly reflecting light in the background in the woods as the camera pans sideways following the two actors. The shiny object looks like it might be a mirror of a car, since it is above the ground.

Kumar Patel:
I'm taking the most incredible dump of all time, man.

Harold Lee:
You couldn't wait until I got out of the shower?

Kumar Patel:
Um, may I remind you that we both just ate 30 burgers and 4 large orders of fries?
[continues to take a dump]

Kumar Patel:
Don't worry, in a little bit I'm sure it'll hit you too.

Harold Lee:
Maybe, but I'm going to wait until you get out of the shower!

Kumar Patel:
Well don't wait too long. We gotta leave for the airport in an hour.

Harold & Kumar do it again


As a fan of Harold and Kumar go to White Castle, I really didn't think
they could recapture the magic of the first film in the sequel. Sequels
are, so often, horrible disappointments. But the World Premiere of
Harold & Kumar Escape from Gauntanamo Bay last night as Austin's SXSW
Film Festival was simply awesome. The audience loved America's favorite
slackers on their next adventure as their trip to Amsterdam goes
incredibly wrong.

Whereas the first film challenged racism and stereotyping, this one
continued the theme into issues of racial profiling and War on Terror
paranoia. These multicultural slackers are becoming American every-men
that we can all relate to. While there are times when Harold & Kumar's
antics are just plain silly, they are also incredible human characters
who are struggling with real challenges around parents, romance,
friendship, the law, and race. Harold & Kumar make us laugh while they
also challenge our perceptions and expectations of social and political
reality.

Cho and Penn were wonderful reprising their original roles. Neal
Patrick Harris was back again as a strange variant of himself. Rod
Corddry provides a wonderful addition to the cast as the completely
paranoid government agent. Overall, the film is perhaps a tad below the
original, but a tad below excellent is still a wonderful comic romp
that all fans of the original and many new fans should enjoy. Unlike
the first film which gained a cult following on DVD, Harold and Kumar
Escape from Guatanamo Bay will undoubtedly be a huge hit in the
theaters. The audience here in Austin absolutely loved the two lovable
anti-heroes. I look forward to many more adventures from Harold and
Kumar.

TagsNetherlandsNPH
The Objective
Then She Found Me