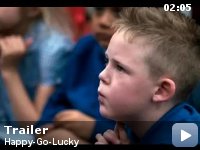 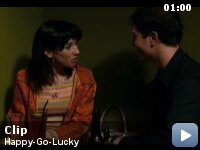 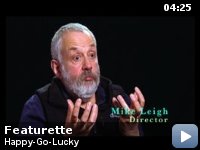 A look at a few chapters in the life of Poppy, a cheery, colorful, North London schoolteacher whose optimism tends to exasperate those around her.

Storyline
Poppy Cross is happy-go-lucky. At 30, she lives in Camden: cheeky, playful, frank while funny, and talkative to strangers. She's a conscientious and exuberant primary-school teacher, flatmates with Zoe, her long-time friend; she's close to one sister, and not so close to another. In this slice of life story, we watch her take driving lessons from Scott, a dour and tightly-wound instructor, take classes in flamenco dance from a fiery Spaniard, encounter a tramp in the night, and sort out a student's aggressive behavior with a social worker's help. Along the way, we wonder if her open attitude puts her at risk of misunderstanding or worse. What is the root of happiness?

Taglines:
The one movie this fall that will put a smile on your face.

Errors in geography:
Poppy cycles South of the river over Blackfriars Bridge but gets off in postcode EC1 (shown on a road sign), which is north of the river. A minute later, when she walks into a shop, she's in SE1 – which is where she should have ended up.

Poppy:
[pulls out book from shelf]
The Road to Reality…
[smiles and pushes the book back]

A cheerful film with an underlying vein of tragedy


Happy-Go-Lucky has been reviewed in the British press as a relatively
lightweight Mike Leigh movie, but I'm not so sure. The story revolves
around Sally Hawkins' remarkable performance as primary school teacher
Poppy Cross, a highly unusual character in that Hawkins and Leigh
between them manage to make her consistently cheerful and optimistic
without being either naive or irritating. Poppy is presented as both
relentlessly cheery and, on another level, remarkably intuitive;
throughout the film, she has a series of encounters with troubled male
figures (a boy in her class who has started bullying, a very strange
homeless Irishman and, above all, her phenomenally uptight driving
instructor Scott) and in all of them, Poppy's liveliness and friendly
curiosity about other people is seen to be a powerful counter to male
self-pity, anger and despair.


Hawkins' character is not someone who is inclined to let life get her
down, so it's just as well that she is surrounded by people with a
somewhat more sardonic or downbeat take on reality. Her flatmate Zoe
(Alexis Zegerman, very good) is a wonderfully dry and sarky counter to
Poppy's enthusiasm, although the affection between them is palpable.
Poppy's younger sisters Suzy and Helen are also quite different; Suzy
is a law student who is more interested in clubbing, drinking and
playing with her brother-in-law's Playstation than in criminal justice,
while Helen is heavily pregnant, obsessed with acquiring the trappings
of a respectable suburban life and unable to understand how her older
sister can be so happy living in a rented flat and not stepping onto
the property ladder.

The big surprise for me is that I had been led to believe that this is
a more or less straightforward feelgood film. It isn't. Scott, Poppy's
driving teacher (Eddie Marsan), is the most affecting character in it,
and one of the greatest and most unforgettable characters in Leigh's
oeuvre. Most of the reviews I've read of the film depict Scott as a
hateful, sinister or otherwise despicable character, but although it's
true that he is an uptight, judgmental, angry bigot, it is also
perfectly clear from his first appearance that he doesn't know what
he's talking about and that he is driven by emotional problems that he
hasn't even begun to get a handle on. Marsan's extraordinary
performance is one of the best things I've seen on film for a long
time. Scott has been afflicted with very bad teeth and a mild speech
defect (he can't really say the letter 'r') and although his inner
anger and bigotry is played for laughs for a lot of the film, in the
end it is allowed to blossom forth in a riveting scene where his fury,
jealousy and terror of his own darkness spill forth in a heartbreaking
and riveting torrent. If part of the point of art is to help us to
understand people we would otherwise have little sympathy with, then
this film is a work of art. I've never seen Marsan before but he
deserves awards for this movie, no question.

Happy-Go-Lucky is a highly enjoyable and often very funny film, but it
also carries terrible sadness. I have never been a massive fan of Mike
Leigh, but lately I have to admit that I was wrong. He just seems to
get better and better.