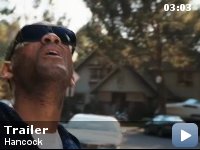 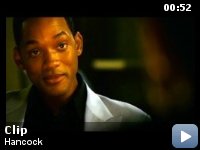 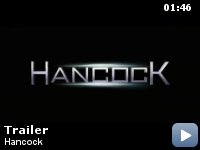 A hard-living superhero who has fallen out of favor with the public enters into a questionable relationship with the wife of the public relations professional who's trying to repair his image.

Storyline
The powerful superhero John Hancock has become a joke because of his alcoholism and clumsiness. He has also become the most hated man in Los Angeles. Though he has saved many lives, he also destroyed a lot of property, costing the city millions every time he goes into action. When he saves the life of PR expert Ray Embrey from an oncoming train, the executive is thankful and believes he can restore Hancock's image as a true superhero. He brings the anti-hero home for dinner and introduces him to his son Aaron, a big fan, and to his wife, Mary. But for some mysterious reason Mary doesn't want Hancock anywhere near her or her family.

When Mary gets ready for bed, she is wearing a Macalester College (St. Paul, Minnesota) T-shirt, from director, Peter Berg's alma mater.

Continuity:
When the train comes to a halt, the freight car behind the locomotive is a gondola, but when Hancock walks around the locomotive and sees the rest of the train piling up behind it, the gondola has changed to a boxcar.

Classic case of great idea, mediocre execution. Strong performances are marred by weak CGI and a lack of a central villain.


Will Smith. That's all you've got to say, and you're guaranteed a big
opening at the box office. Well, from the looks of it, Smith also
guarantees you at least a mildly entertaining film, which is what we
get in his latest movie, Hancock. In the hands of any other leading
star, Hancock would probably end up being a below average film. It's
Smith's charisma, charm, and unwavering likability that ultimately save
the film. He can make you laugh, cheer, cry, and even root for his
character (who is a total ass, as he is reminded a number of times
throughout the movie) no matter what kind of shenanigans he may cause.


Hancock is not the generic superhero film and is probably one of the
more ingenious ideas to come across a producer's desk in quite some
time. To me, what it seems like is that the writers of the film loved
the idea, started off extremely strong, and then began to realize that
how hard it is to sustain a simplistic idea over the course of a full
length motion picture (and it is because of this that Hancock is
relatively short). The writers' plan to solve this problem is to throw
in a totally unnecessary and badly handled plot twist to keep the
audience guessing. The lack of a central villain also hurts the movie a
lot. The character that serves as Hancock's enemy in the finale isn't
even well acted. The person is laughable.

This is an action movie, so it should come as no surprise to see well
done and original action in the movie. However, I felt the effects
could have used a few more weeks of polishing in the editing room. The
camera is also quite crampy. I also have problems with the film's
score, as it does not add an epic feeling to the film like it should
have. I felt like something was missing in the climax of the film
(which is not the end). The action scenes, while entertaining and
original, were not long enough to engage the audience like say, The
Incredible Hulk, nor were they as jaw dropping as those in Wanted.

The film's strength rides on its three stars. Action veterans Will
Smith and Charlize Theron both deliver winning performances as usual,
and that should come as no surprise. Smith's charisma is enough to make
anyone happy, and it's so easy to see why so many people love him.
Theron is always a sight to behold (except in Monster, lol), and this
film is no different. I enjoyed her performance the most, especially in
the second act and the beginning of the third. Jason Bateman, who seems
to be the bridge connecting the performances of Smith and Theron, is
great as usual, and likable, marking a change from his recent turn in
"Juno". There really isn't another performance to note, and part of
Hancock's weakness is that there are really only three main engaging
characters. It should also be noted that the kid who played Bateman's
son was absolutely adorable.

Hancock is the classic case of great idea, and mediocre execution. I
can see this idea being remade years from now, and pulled off even
better. It's not a fault of Peter Berg, the film's director, as the
real weakness is in the screenplay, which falters after an excellent
and wonderful opening act. It's not a bad film by any means, nor is it
great. It's in between "okay" and "good".