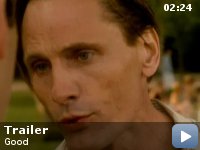 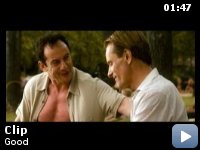 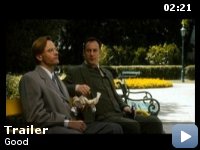 The rise of national socialism in Germany should not be regarded as a conspiracy of madmen. Millions of "good" people found themselves in a society spiralling into terrible chaos. A film about then, which illuminates the terrors of now.

Storyline
John Halder is a 'good' and decent individual with family problems: a neurotic wife, two demanding children and a mother suffering from senile dementia. A literary professor, Halder explores his personal circumstances in a novel advocating compassionate euthanasia. When the book is unexpectedly enlisted by powerful political figures in support of government propaganda, Halder finds his career rising in an optimistic current of nationalism and prosperity. Seemingly inconsequential decisions lead to choices, which lead to more choices… with eventually devastating effect.

Taglines:
Anything that makes people happy can't be bad, can it?

Romola Garai was cast as the female lead but backed out to take some time off movies to concentrate on University. Jodie Whittaker replaced her.

Errors in geography:
In the scene, when Halder takes a walk with his ex-wife in the cemetery, which is supposed to be in Berlin, Germany, Hungarian names are clearly visible on the gravestones.

It would be difficult to imagine a more tentative project to undertake
than a Holocaust film for numerous reasons. The historical resonance
still proving an understandably sensitive or harrowing issue for many
audience members requires a certain delicacy in storytelling,
faithfully and accurately depicting the horrific events in a fashion
just visceral enough to drive the point home without being so gruesome
as to alienate audiences. At the same time, the events of the second
world war have been approached cinematically so frequently that it
becomes equally perilous to avoid restating facts or perspectives than
have been presented countless times before, making the latest effort to
do so irrelevant. It is in this regard that Good, director Vicente
Amorim's adaptation of C.P. Taylor's theatrical production excels –
while the film may not be the most harrowing or affecting portrayal of
the tragedies of the time, the craftily different approach to which
such matters are breached makes for a compelling, if occasionally
flawed telling.

There can be little doubt that Amorim's film is hardly an easy watch
from its dour subject matter to heavy emotional questions, ranging from
euthanasia debates to the values of loyalty versus self preservation
and the true scope of one's choices (drawing explicit parallels to
contemporary issues as well as past ones), but avoids self-righteous
preaching in favour of quietly needling questions. Indeed, Good proves
an odd myriad of both decidedly mainstream and unconventional elements,
making the story feel somewhat uneven from scene to scene. The sturdy
script nonetheless proves rather conventionally crafted for the
intriguing premise, with few meaty lines and many supporting characters
reduced to stagey, contrived appearances which detract periodically.
Yet simultaneously, several unexpected but greatly welcome quirky
touches emerge from what may otherwise have descended into formula,
such as the odd moment of out of place but oddly fitting humour, or the
addition of protagonist Halder experiencing musical hallucinations
heralding momentous decisions in his life which impact others. It is
ultimately these unorthodox touches which distinguish Good from the
countless other films tackling similar subject matter, going about its
business in such a laudably nuanced fashion that comparisons become
almost unnecessary.

Where other filmmakers may have sought out soaring emotional crescendos
building into an explosion of mainstream melodrama, Amorim keeps the
intensity festering on a dull burn, his quiet, subtle telling of the
story making it all the more sickeningly credible and resonant than a
contrived downpour of contrived emotion. However, this does not go to
say that the film shirks emotional intensity in the least, but rather
builds it so subtly that by the gruesome climax, with shockingly vivid
depictions of an SS attack on a Jewish ghetto and a desolate
concentration camp sequence the viewer is all the more devastated by
the emotional vice which has without warning ensnared them, making
Good's finale one which will stick with most viewers for quite some
time afterwards.

That being said, the film is hardly without its concerns, as the
nonlinear storyline can prove disconcertingly jumpy, undermining some
of the emotional tension, and the decision for all German characters to
speak with upper class British accents may infuriate some audience
members tired of such cultural appropriation. Similarly, Simon Lacey's
musical score proves overly melodramatic and distracting where a
quieter, more subtle score more in keeping with the tone of the film
would have done wonders. However, the unassumingly innovative
cinematography (including a Wellesian five minute tracking shot at the
finale) is superb, making perfect use of the visually alluring Budapest
locations and ably capturing the excellent period costumes and sets.

Designed as a talk piece, the slight imbalance of the script leaves it
primarily up to the actors to keep the film afloat, and they mercifully
do not disappoint. Viggo Mortensen is superb as Halder, the passionate
professor drawn into a world he does not fully understand and
continually finding the repercussions of his decisions spreading wider
than he could ever have guessed. Mortensen is far from a showy actor,
making him the ideal choice for such a character, as, scattered on the
outside but festering on the inside, Mortensen conveys the heart of the
character far more with his silence than with his words, emanating
emotion with every fibre of his being. Jason Isaacs gives a similarly
powerful performance as Maurice, Halder's Jewish therapist and close
friend and the film's most poignant emotional hook. As Maurice is
gradually stripped of his privileges, rights, freedom and dignity step
by step, equally outraged by his friend's involvement in the
affiliation condemning him, Isaacs transforms from casually confident
to beaten down but fiercely outraged, coming alight with fiery
intensity. Jodie Whittaker, fresh off a mesmerizing debut in 2006's
Venus once again generates charming charisma as Halder's impressionable
student and later wife, though her chirpy enthusiasm does prove
slightly out of keeping with the more dour tone of later scenes. Mark
Strong proves impressively intimidating as a surly Nazi official, but
Gemma Jones manages to both delight and infuriate simultaneously as
Halder's ill and mentally unstable mother (adding poignancy to his
euthanasia stance) who wavers between powerful and affecting and
irritatingly over the top, making it difficult to sympathize with one
who should have been the sympathetic centerpiece of the film.

While hardly without its structural frustrations, the subtlety and
unconventional take on very serious historical issues make Good a
deeply compelling, affecting and thought-provoking morality play,
mercifully avoiding preaching or Hollywood emotional wrenching in
favour of quiet resonance. For any viewers looking for challenging and
draining subject matter tackled from a fresh approach, Good should
prove the ideal antidote to any watered down mainstream efforts.