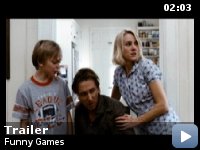 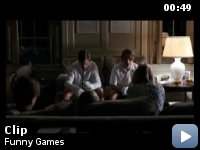 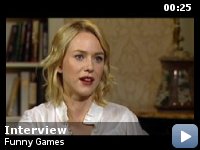 Storyline
In this English-language remake of a deconstruction in the way violence is portrayed in the media, a family settles into its vacation home, which happens to be the next stop for a pair of young, articulate, white-gloved serial killers on an excursion through the neighborhood.

Taglines:
Shall we begin?

The film is a shot-by-shot remake of the original.

Continuity:
During the opening sequence, when George and Ann are listening to CDs in the car the shadows of the car and boat indicate that the sun is alternating between side-on/quite low in the sky to directly behind the car and almost overhead.

George:
Why are you doing this?


When I heard Michael Haneke was re-making Funny Games in America I
wondered why: what purpose could it possibly serve? The set-up to both
versions is simple in that a bourgeois family is subjected to a
torturous ordeal by a couple of ever so polite psychopaths. Moreover,
like the original the re-make is a cruel exercise in exposing our
fascination with the violence depicted in the media – the "our"
specifically meaning the middle classes, comfortable in our existences
and oblivious to the horrors of the world.

However, Haneke is on record as saying that he always considered Funny
Games to be an "American story", as he regarded the use of violence as
a form of entertainment to be a specifically American phenomenon. No
matter that this is a bit of a flawed viewpoint: having the aggressors
seem straight out of the O.C. gives the impact of their sadistic
actions an even more discomfiting air. Michael Pitt (charismatic and
barbarous) and Brady Corbett (seemingly dopey but utterly vicious) are
both excellent, but their performances leave one feeling a bit um "seen
it all before".

Which takes me back to my first thought: what is the point? Cosmetics
aside this is exactly the same film, right down to the assumption that
the well to do like to listen to classical music and that the audience
may be unsettled by playing them some thrash metal. Haneke even has
Pitt address the camera and manipulate the film, so re-using the trick
about playing with reality and focusing the viewer on what actually
counts as real. It is just that this playing around does not carry the
impact it did 10 years ago.

In fact, due to the unconventional nature of the film and the vast
disparity it offers with reality it's hard to care much at all. Yes
what happens is horrible, but it does not feel at all real. I'm waiting
for someone to point out that, that is Haneke's point, but frankly, I
don't care. No amount of intellectualising can make this watchable.

You would think Haneke would know better too. His most recent film
Hidden took a genre film and flipped it about to deliver one of the
most surprising and intellectually challenging thrillers of the decade.
By stringing the audience along and offering some sense of catharsis
and understanding of character motivation he offered a way in. Funny
Games U.S. offers no such intrigue or tension and is ultimately a big
step backward. He may see it as an American story, but it worked better
as a small Austrian film, set in anywheres-ville Europe.