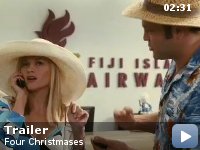 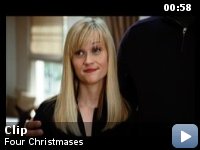 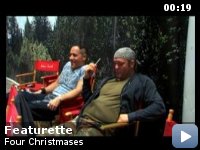 A couple struggles to visit all four of their divorced parents on Christmas Day.

Storyline
Brad and Kate have been together three years, in love, having fun, doing all sorts of things together with no intention of marriage or children. Christmas morning, they're on their way to Fiji, having told their two sets of divorced parents that they're off to do charity work. Through a fluke, they have no choice but to visit each of their four idiosyncratic parents. As the day progresses, Brad and Kate remember growing up, each learns more about the other, and Kate realizes that her life may not be as good as it could be. Do they know each other well enough to weather the storms families bring?

Taglines:
His father, her mother, his mother and her father all in one day.

In order to develop the characters and give each of them an identity, director Seth Gordon drew up detailed timelines of their lives.

Errors made by characters (possibly deliberate errors by the filmmakers):
When Brad and Kate are playing backgammon on the sofa he shows her where to move her pieces by moving one clockwise and one counterclockwise. In backgammon a player's pieces move in one direction.

Kate:
Cassie! That marker in your mouth, I peed on it!


Four Christmases starring Reese Witherspoon and Vince Vaughn, I suppose
I can accept it, just very strange seeing them as a couple on screen
together. But anyways, every year we get a Chrismas movie, it's either
going to be fun or really bad, sorry to say, but Four Christmases is
nothing special, another year with an easy to forget movie. But still
while this movie doesn't really stand out and it is incredibly
predictable, there are some really fun moments. We at least finally
have the split up family vs just one crazy family. Reese really turned
on the charm and stole this movie, she was so adorable and she was
great in the jump jump scene with the evil kids. Vince had some moments
as well, but it's more the supporting cast that was just a fun addition
to the story.


When upscale, happily unmarried San Francisco couple Kate and Brad find
themselves socked in by fog on Christmas morning, their exotic vacation
plans morph into the family-centric holiday they had, until now,
gleefully avoided. Out of obligation-and unable to escape-they trudge
to not one, not two, but four relative-choked festivities, increasingly
mortified to find childhood fears raised, adolescent wounds
reopened…and their very future together uncertain. As Brad counts the
hours to when he can get away from their parents, step-parents,
siblings and an assortment of nieces and nephews, Kate is starting to
hear the ticking of a different kind of clock. And by the end of the
day, she is beginning to wonder if their crazy families' choices are
not so crazy after all.

I would recommend Four Christmases just if you wanna see a cute holiday
movie in the theater this year. Vince and Reese had good chemistry and
this movie just represents the craziness of having to go to all the
families every year for Christmas. There are some really good laughs
here and there, I loved the scene where Reese played the Virgin Mary
and Vince was Joesph in their church play and Reese just gets stage
fright and freezes while Vince just makes a fool of himself on stage.
Over all this is a cute movie, there's nothing special about it, but
it's worth the look.