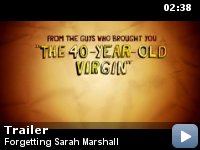 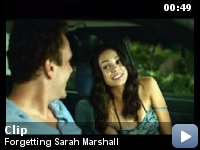 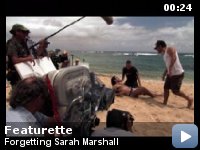 Devastated Peter takes a Hawaii vacation in order to deal with recent break-up with his TV star girlfriend, Sarah. Little does he know Sarah's traveling to the same resort as her ex … and she's bringing along her new boyfriend.

Storyline
Peter is a composer and a likable sad sack who's devastated when his girlfriend of five years, Sarah Marshall, the star of a cheesy CSI-style crime show, dumps him. He weeps, he rails, he mopes. Finally, his step-brother Brian suggests Hawaii, so Peter heads for a resort on Oahu where, as he's checking in, he sees Sarah and her new beau, Aldous, a polymorphously perverse English rocker. The weeping and moping start again, until Peter is rescued by Rachel, a thoughtful hotel clerk who invites him to a luau and to hang out. Although he constantly runs into Sarah and Aldous, Peter starts to come alive again. Will Sarah realize what she's lost, and what about Rachel?

Continuity:
When Peter first meets Sarah and Aldous in the hotel lobby in Hawaii, Aldous approaches Sarah from behind and swats her butt with his open right hand. In the next shot he is holding his single flip-flop sandal in that same hand.


I often go see advance screenings in my area, especially now that I
must officially be on "the list" as I am constantly finding tickets in
my work inbox. This was the second Apatow production I've seen in
advance and just like "Superbad", this did not disappoint. At the same
time, while many of the cast members may be recognizable, there seems
to be something different about this installment than I've seen in the
likes of "40 Year Old Virgin", "Superbad", or "Knocked Up".


For starters, there was a definite presence of the "TV actors on the
big screen" theme here, but I am pleased to report that Jason Segel,
Kristen Bell, and Mila Kunis take to movies like naturals. Like many
Apatow productions, Segel penned the script and takes over as lead
Peter Bretter, proving yet again that with this crew the writer is best
suited for the leading role. Segel delivers a character we all know too
well from our own personal experiences and never breaks role from the
shocking beginning to appropriate ending. I even give Segel extra
credit for not completely victimizing his character and pointing out
apparent flaws on both ends of the ending relationship.

Kristen Bell plays Sarah Marshall, the iconic ex of the film, but her
role sits on the back burner along with the truly hilarious Aldous Snow
(Russell Brand) to make way for a leading role in Mila Kunis. From the
beginning it is clear that her not-too-smart and shallow role of "That
70s Show" didn't follow her to "Forgetting"'s script. Kunis plays
Racheal, a hospitality girl for the hotel that "Forgetting" takes
place, and subsequently deals with Peter as he tries to get over Sarah
Marshall. Her character is intelligent, charismatic, and appreciative
of the good in people, a strong juxtaposition to the seemingly selfish
starlet Sarah Marshall. Kunis owns the role with pride, even slipping
in gestures and glances that didn't seem to initially be in the script.
Hopefully this will open her up for more serious roles than "American
Psycho 2" and the typecasting that often happens with TV actresses like
her.

The star of the film, in my opinion, easily has to be Russell Brand,
who plays the over-conscious over-sexed rock star Aldous Snow. Snow
adds the necessary level of comedy that could have been missing from
what is truly a tragic plot. About halfway in the film, I couldn't help
but snicker to myself just with the presence that Brand creates
(complete with perfect costume choices). The only downfall to a
character who is truly the Mercutio of this tragedy is that Brand
clearly overshadows Bell's performance as Sarah Marshall, who is
ironically the most forgettable character of the film.

The writing flows with well-timed jokes, apathetic digs, and shocking
vulgar humor. There is even a few moments where you feel Segel was
digging on the cast with jokes involving crime dramas (Segel did time
on "CSI") and TV actresses in horrible horror movies (Kunis did the
atrocious "American Psycho 2"); not sure if it was intentional, but I
caught what I thought was a reference. Just as with most Apatow
productions, leave the kids at home. Unlike the rest, however, the
crude humor doesn't overflow and turn off most audiences (like I
noticed with "Superbad"). It also doesn't get very heavy in the least
(which is what I felt hurt "Knocked Up"). I think Apatow has found a
great balance with this production and Segel's script. I also want to
give credit to Nicholas Stoller , who proved that he can be successful
as a director after the hit he took from helping write "Fun with Dick
and Jane".

All in all, this comedy is just another example of a good time for
adults. It keeps a consistently flowing script, unlike many recent
comedies that seem to lose pace as they close the story. While crude,
the jokes are just light enough to appease most adult audiences and the
short 100 minute run time will ensure you won't be glancing at your
watch waiting for it to end, just laughing hysterically.