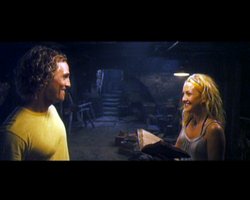 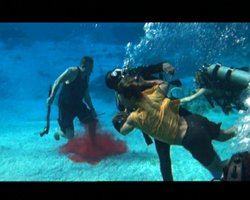 A new clue to the whereabouts of a lost treasure rekindles a married couple's sense of adventure — and their estranged romance.

Storyline
Benjamin Finnegan is a deep-sea treasure hunter certain he's onto the find of the century in waters near an island close to Key West owned by a murderous rap star to whom Ben is in debt. Ben's flat broke and recently divorced from Tess, his long-time research and diving partner whom he still loves. She's nearby, working as a steward aboard the yacht of Nigel Honeycutt, a multimillionaire. The rapper has hired a rival treasurer hunter. Can Ben convince Nigel to bankroll his search, convince Tess to work with him, keep the rapper and his thugs at bay, and find a Spanish treasure hidden for centuries and rich beyond imagination?

Andras:
[after seeing Gemma's hat fly off in the wind]
Hey look! The hat! He is a Frisbee.


For the life of me, I cannot figure out why this movie is getting as
lousy reviews as it is. I walked out of the theatre quite pleased; even
if this movie will not get an Oscar, it earned the price of my ticket.
It's campy, silly, and bright, and there is nothing like a fluffy romp
around the sunny islands to cure those winter blues.

Admittedly, it's a contrived, predictable mystery, but that proves to
be the focus rather than the romantic comedy that was promoted. But in
the spirit of Nancy Drew and the Hardy Boys, it's a spunky predictable
mystery. No, the characters were not all complex, but at least the
powers that be went to the trouble of making them entertaining and
personable.

Kate and Matthew have the chemistry they had in "How to Lose a Guy in
10 Days". They have the sunny dispositions to pull off a
mindless-but-fun storyline and to work with a wacky cast.

It's mind candy in all its fluffy goodness.