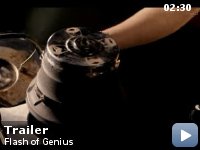 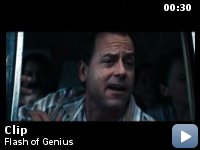 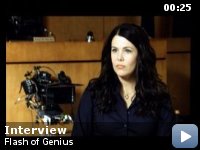 Robert Kearns takes on the Detroit automakers who he claims stole his idea for the intermittent windshield wiper.

Storyline
Based on the true story of college professor and part-time inventor Robert Kearns' long battle with the U.S. automobile industry, Flash of Genius tells the tale of one man whose fight to receive recognition for his ingenuity would come at a heavy price. But this determined engineer refused to be silenced, and he took on the corporate titans in a battle that nobody thought he could win. The Kearns were a typical 1960s Detroit family, trying to live their version of the American Dream. Local university professor Bob married teacher Phyllis and, by their mid-thirties, had six kids who brought them a hectic but satisfying Midwestern existence. When Bob invents a device that would eventually be used by every car in the world, the Kearns think they have struck gold. But their aspirations are dashed after the auto giants who embraced Bob's creation unceremoniously shunned the man who invented it…

Taglines:
They had the power. He had the truth.

Remained in theaters for only three weeks.

Continuity:
During the scene in the coffee house between Dr. Kearns and his son Dennis, the newspaper changes suddenly from being held between Kearns' hands, to lying on the table, to back between his hands. Interestingly, the actor is using it regardless of its position to emphasize his emotion, for example by squeezing it between his hands or tapping it with his finger as it lies on the table.


It was great to see Greg Kinnear in another flawless performance; here
as Dr. Bob Kearns, inventor and professor. To me, I think of Mr.
Kinnear as sort of the cocker spaniel of American actors. Perfectly
companionable for just about everyone. He just feels right in so many
roles it's hard to imagine anyone else having done them. This is
another instance of his having added immeasurably to what may have
otherwise been a more uninteresting character. After all, it's hard to
imagine anyone making an engineer or professor seem interesting; but in
this outing Kinnear certainly accomplishes that.

Adding her own note of quiet grace and perfect screen presence, Lauren
Graham as Phyllis Kearns gives her character both charm and great
heart, not to mention that she looks better in a plain white nightgown
that just about anyone I've seen… well, except for my wife, of
course.

There are other great performances here too, like Mitch Pileggi as the
bad guy from any corporation in America, Tim Kelleher as his greasier
side-kick and Dermot Mulroney as a slightly smarmy friend of Kearnes'.
Likewise the hoard of young actors playing the Kearns children added a
perfect familial note to the vehicle.

But, more than any of these fine people, the focal point here was the
story as it always is in these social consciousness melodramas. Yes,
Virginia. The wheels of American industry is greased with the bones of
the cheated and betrayed genius of America. That is so universally true
it's a well known sub-plot to all of America's engineers and
manufacturers. What is also well known is what happens when they try to
find justice, let alone an iota of truth; which is so accurately and
skillfully portrayed in this film.

Speaking as an engineer who has worked in American industry for over 40
years, I can say that I have seen this more times than I can count. It
goes on every day right here under your noses, America, and no one ever
does a thing to change the way America fails to protect her fragile
genius. That is deliberately so. That is so because the laws America
uses to define how these things are handled are made by lawyers, for
lawyers. It would cease to be profitable if the laws were crafted to
actually protect it's most precious resource – it's creative people.
But it's not; the laws are instead crafted to provide fat and frequent
paychecks to every leach that slithers through the "halls of justice".

Just as Kearns did, I had to learn the hard way that justice in America
belongs only to those with a fat enough wallet to buy it through the
local outlet. If you don't have the six figures to hire a lawyer then
you have no rights and no freedom in this country. Like a Wildebeest
grazing blissfully in the middle of the herd, you have only not been
awakened to that fact yet because no one has yet decided to attack you,
or steal from you.

This has been the long way around to tell you that the creators of the
film got it exactly right, with one serious flaw… for every Bob
Kearns who has eviscerated themselves to win a Pyrrhic victory of the
sort we witness here, there have been thousands who have given up for
being too shallow in pocket or too short of mental fortitude or too
short of the desire for self-flagellation required to press through to
an empty, moral victory.

And even here, we see unmistakably that this "victory" costs Kearns
what he valued most in his life. He didn't even live to see himself
depicted as "heroic" in this fine film.

Still, thank you Bob, wherever you are.