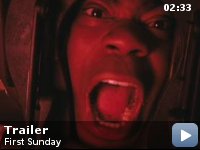 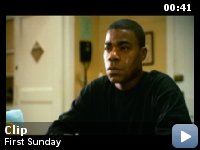 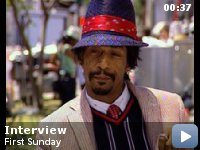 Durell and LeeJohn are best friends and bumbling petty criminals. When told they have one week to pay a $17,000 debt or Durell will lose his son, they come up with a desperate scheme to rob their neighborhood church. Instead, they end up spending the night in the presence of the Lord and are forced to deal with much more than they bargained for.

Storyline
Durell Washington and LeeJohn Jackson are best friends and bumbling petty criminals. When Durell learns that his ex-girlfriend plans to move to another state with their son Durell Jr.–unless they can get her $17,000 to pay off a debt– and so Durell and LeeJohn ultimately comes up with a desperate scheme to rob their neighborhood church. But when the duo fumbles their way through the break-in, they discover someone has beaten them to the punch. In order to get their hands on the money, Durell and LeeJohn are forced to spend the night in the presence of the Lord and his followers–and end up getting a lot more than they bargained for.

Film prints were delivered to theaters under the codename "Bad to Worse".

Continuity:
When LeeJohn and Darrel are in the Cafe, the toast (bottom right corner) he orders has butter on it in one frame and then a fork on it in the next frame. The toast changes throughout the whole scene.

Durell:
You need to worry about getting your hair burnt.

Omunique's Client:
You need to be worrying about burning yourself out a job.


What can I say? I didn't expect much walking in. Can you blame me? Did
you see the trailer? You know a comedic trailer is unfunny when the
funniest thing in it is the studio logo at the beginning and that
wasn't funny. This debacle stars "multi-talented" act-rapper Ice Cube
whose career started melting after Barbershop 2. Ice Cube doesn't even
try to be funny nor does he have anything funny to do or say. Why is
this guy even in comedies or movies for that matter? The comedy
revolution of a plot consists of two losers trying to get rich quick.
That is what the plot boils down to. Ice Cube's character wants to
prove to his son that he is not a loser and Tracy Morgan's character
wants to prove to the audience that he belongs in this movie. Neither
of them are believable. The writer/director *Insert black
writer/director's name here* tries to add dramatic elements to a
humorless comedy script and fails just as much as he was trying to add
jokes.

There is something in this movie about the 2 main characters trying to
rob a church and realizing that the money in the church is already
stolen, but I was too distracted by the idea that someone actually
green lighted this script. First off, is it even an interesting idea to
rob a church? I guess the writer figured that banks stopped carrying
money. Secondly, who the hell thinks Katt Williams's one liners in this
film were funny? The director kept cutting to him as if he said the
most uproarious thing since Stephen Hawking yodeled Green Eggs and Ham.
You know a comedy is bad when they go to one character for comic
relief…IN A COMEDY!!! This movie tries way too hard to have many
sentimental and redeeming moments wishing for you to stand up and
cheer. But such "redeeming" moments as Ice Cube hugging his movie
offspring and Tracy Morgan feeling as he belongs in society felt as if
they were added as a last minute script revision because the comedy
wasn't working. The hilarity of this movie consists of Tracy Morgan
getting a massage from a badly dubbed transvestite. It also includes
"pimped out" wheelchairs because a wheelchair with hot chrome rims
equals comedy gold. By the way, those wheelchairs are mentioned more
times in this movie than Jesus Christ in the Bible.

First (and hopefully the last) Sunday isn't the worst movie ever made.
It's not as awful as other urban comedies like Who's Your Caddy? or
anything with Mike Epps. First Sunday is by far no Epic Movie (which is
definitely a 0 out of 500) but it is clearly a waste of time. Not only
for the audience but for the people involved in making it. It adds
nothing new and it insults the audience's intelligence many times. I
was going to list a bunch of movies that are funnier than First Sunday
but after listing Schindler's List, Citizen Kane, and March of the
Penguins I got tired. So in conclusion, save your time, save your life,
and most importantly save your money. If you save your money that will
most likely prevent a Second Sunday.