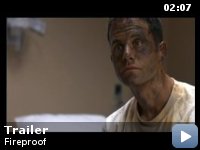 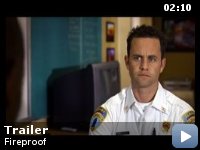 In an attempt to save his marriage, A firefighter uses a 40-day experiment known as "The Love Dare".

Storyline
In Albany, the marriage of Caleb end Catherine Holt is in crisis and they decide to divorce. However, Caleb's father, John, proposes that his son delays their separation process for forty days and follow a procedure called "The Love Dare" to make them love each other again.

Taglines:
Never Leave Your Partner Behind.

In the scene when Caleb is first reading the "love dare" book, there are books on the coffee table. One of those books is "Facing the Giants", which is the novelization of the Kendrick brothers' earlier movie of the same title.

Errors made by characters (possibly deliberate errors by the filmmakers):
When Caleb's father tells him that Caleb's mother was the one who did the Love Dare, the two men are on a long path in the middle of the woods, at least several hundred yards from Caleb's house. Caleb, an athletic fireman, immediately sprints back to his house to apologize to his mother. However, his father, an old man nearly twice his age, arrives at the house about 10 seconds behind him and is not even out of breath.

John Holt:
Has she thanked you for anything you've done the last 20 days?

Caleb Holt:
No! And you'd think after I washed the car, I've changed the oil, do the dishes, cleaned the house, that she would try to show me a little bit of gratitude. But she doesn't! In fact, when I come home, she makes me like I'm – like I'm an enemy! I'm not even welcome in my own home…
[…]


Hollywood is great at letting us participate in the victories of those
who conquer long odds, whether it's sports movies in which the underdog
wins the championship or even movies about unlikely romantic pairings
(geek meets beauty) that end happily in, say, a wedding. But we see few
movies about the joy we feel in conquering the mundane – like in making
a marriage work after both sides have lost the motivation to do so.

This is a movie that shows us how hard it is to revive a near-dead
marriage, and why it matters so much. Yes, there is a religious context
to the movie. A partner in a healthy marriage, we are shown, struggles
to emulate the selfless love and service of Jesus by loving and serving
his or her spouse, as Jesus would. But the religious aspects of the
movie ought not keep away those who are religion-averse. Selfless love
and service as the keys to a joyful marriage are not exclusive to any
religion.