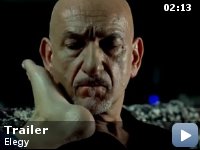 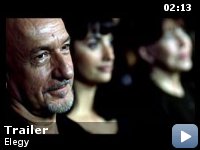 Cultural critic David Kepesh finds his life — which he indicates is a state of "emancipated manhood" — thrown into tragic disarray by Consuela Castillo, a well-mannered student who awakens a sense of sexual possessiveness in her teacher.

Storyline
David Kepesh is growing old. He's a professor of literature, a student of American hedonism, and an amateur musician and photographer. When he finds a student attractive, Consuela, a 24-year-old Cuban, he sets out to seduce her. Along the way, he swims in deeper feelings, maybe he's drowning. She presses him to sort out what he wants from her, and a relationship develops. They talk of traveling. He confides in his friend, George, a poet long-married, who advises David to grow up and grow old. She invites him to meet her family. His own son, from a long-ended marriage, confronts him. Is the elegy for lost relationships, lost possibilities, beauty and time passing, or failure of nerve?

David Kepesh:
I think it was Betty Davis who said old age is not for sissies. But it was Tolstoy who said the biggest surprise in a man's life is old age. Old age sneaks up on you, and the next thing you know you're asking yourself, I'm asking myself, why can't an old man act his real age? How is it possible for me to still be involved in the carnal aspects of the human comedy? Because, in my head, nothing has changed.


Everybody is allowed to do a job just for the money, I know that I do,
but when it comes to the acting profession, I irrationally think that I
expect a little bit more from our finest thespians. I don't know why. I
just do. Take, for example, the actor Ben Kingsley.


Ben Kingsley sometimes annoys the hell out of me. He is one of the best
actors in the world, but sometimes plys his trade in the likes of films
like "Thunderbirds", "A Sound Of Thunder" and "The Love Guru". Such a
waste. Such a shame. Thank God he occasionally realises how good he is
and signs up for a movie as sublime as "Elegy".

"Elegy" is a great movie. Ben Kingsley is supreme in it. He plays David
Kapesh, an expat British teacher and writer. Kapesh is selfish. He is a
player and a commitment phobe, who takes and drops lovers at the drop
of a hat. That is until he meets Penelope Cruz's Consuela Castillo,
with whom he begins a pretty standard affair and, against all
expectations, and much to his dismay, falls in love with her.

"Elegy" has some seriously good, sure footed performances. Ben Kingsley
is on Oscar worthy form. It is as different, but as good a performance,
as his Oscar nominated turns in "Sexy Beast" and "House Of Sand And
Fog". Patrica Clarkson, as Kapesh's long standing mistress, defines
hurt and betrayal, Penelope Cruz completely puts word to the lie of one
daft critic who said that she simply cannot act in the English
language, but the surprise here is Dennis Hopper: His performance as
Kapesh's best friend is light years away from the eye rolling villain
that he normally portrays to make a crust.