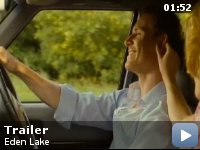 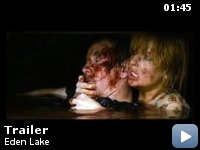 Refusing to let anything spoil their romantic weekend break, a young couple confront a gang of loutish youths with terrifyingly brutal consequences.

Storyline
Nursery teacher Jenny and her boyfriend Steve, escape for a romantic weekend away. Steve, planning to propose, has found an idyllic setting: a remote lake enclosed by woodlands and seemingly deserted. The couple's peace is shattered when a gang of obnoxious kids encircles their campsite. Reveling in provoking the adults, the gang steals the couple's belongings and vandalizes their car leaving them completely stranded. When Steve confronts them, tempers flare and he suffers a shocking and violent attack. Fleeing for help, Jenny is subject to a brutal and relentless game of cat-and-mouse as she desperately tries to evade her young pursuers and find her way out of the woods.

Taglines:
A weekend by the lake, with views to die for.

Continuity:
During close-ups of Steve's hand tied up by barbed wires we can clearly see that his hand is soaked with blood. However, in the immediate scene after, where he managed to wriggle out of the wires and bring his hands in front of him his hand is only bleeding a little bit.


This film could easily have just been some chavs bullying people, but
it is much more then that. I have watched many horror/thriller films
and they have rarely effected me the way this film did. From the
beginning the mood is set of this extremely happy couple living in
their bliss and as most of you will know before watching this the film
is not about their happy relationship. The first thirty minutes of the
film are more easy going then the rest, but still captivating. As the
film continues it shocks you beyond belief, I expected gore but I
didn't expect how the tone of the film would make me feel.

If you have an uneasy stomach or sometimes get emotional, prepare
yourself for this film. It is gruesome but some scenes are a little too
realistic which is what makes the film different. A lot of horror films
similar to this lack realism so the audience cannot connect with the
protagonist as easily, but Eden Lake has been made with a great deal of
empathy for the couple and hate for the young kids. Seeing as there is
a strong connection between audience and the characters there is a
great deal of emotion involved which is unexpected, but this shows that
the film has been made very well and that the actors do their job
perfectly.

The young actors who play the chavs are fantastic, and i'm not going to
say fantastic 'for their age' because they are truly talented actors
regardless of age. Jack O'Connell plays the ring leader of the group
Brett, and he really shines. Playing a merciless hateful character is
not the easiest thing to do, but if you didn't know better you would
think that is how he is in real life because he is just that good. I
have been a big fan of Thomas Turgoose since he was in This is England
because he is also a very talented and realistic actor and he doesn't
disappoint in this film either, but he isn't in it as much as I would
like. The other actors in the group are equally as talented. As for the
couple they were perfectly cast and they have great chemistry, I have
been a fan of Michael Fassbender (who plays boyfriend Steve) for a
while but I had never really noticed Kelly Reilly before (who plays
girlfriend Jenny) but she plays the character very well and hits the
right emotions at the perfect time.

All in all the film draws you in, keeps you captivated, shocks you with
the gore and blows you away with emotion. The best thing about it and
what makes the movie special and better then most other similar films
is just how real it is. You almost feel like this is happening to you,
and their reactions are also real human reactions too. The film is
truly great and one of the best of its genre, very impressive all
around.