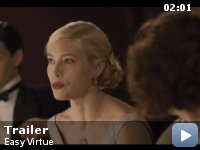 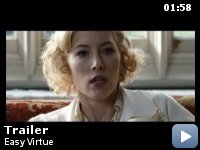 A young Englishman marries a glamorous American. When he brings her home to meet the parents, she arrives like a blast from the future – blowing their entrenched British stuffiness out the window.

Storyline
Between world wars, the Whittaker's estate is sinking; only the iron will of Mrs. Whittaker staves off bankruptcy while she awaits her son John's return from the continent. To her dismay, he brings a bride: an American widow who races cars. The bride, Larita, thinks she and John will visit and then go to London, where he'll work and she'll race. But John is to the manor born, and mother is nothing if not a master at plans and manipulation. Soon it's all-out war between mother and bride, with John's father, a burnt out veteran of the Great War, in the bride's corner ineffectually. Mother has a plan to join with the neighboring estate; only Larita is in her way. Can't we all get along?

Though not expressly stated, the story gives the impression the Larita is somewhat older than John (she repeated refers to him as a boy). In fact, Jessica Biel is actually younger than Ben Barnes by several months.

Anachronisms:
In the scene where the newlyweds arrive at the family estate, a footman unloads their luggage from the car. The suitcase shown is a Halliburton aluminum case, which wasn't available to the public until after World War Two, despite the film being set well before that war. The model shown was actually produced in the mid-1950s through the 1960s.


Easy Virtue is a very liberal adaptation of Noel Coward's play.
Director Stephan Elliot (The Adventures of Priscilla, Queen of the
Desert) has tried to make the film more contemporary and very distinct
from the Merchant-Ivory school of film.


The story is set in the roaring twenties where John (Ben Barnes) from
an aristocratic English family marries Larita (Jessica Biel), an
American race driver, after a whirlwind romance in France. However his
mother Veronica (Kristin Scott Thomas) is none too pleased while John's
father Jim (colin Firth) finds a soul mate in Larita. These
relationships, including those with John's sisters, make for a very
intriguing and entertaining hour and a half, The acting, as could be
expected from such a cast is uniformly excellent with perhaps Jessica
Biel standing out a little more.

One of Stephan Elliot's nice touches is an anachronistic use of such
songs as Car Wash and Sex Bomb, done in a very twenties style. The
addition of a hilarious "dog scene" is another nice touch. Fans of Noel
Coward (and even Merchant-Ivory) won't be disappointed.