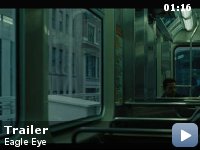 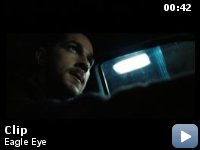 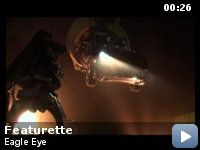 Jerry and Rachel are two strangers thrown together by a mysterious phone call from a woman they have never met. Threatening their lives and family, she pushes Jerry and Rachel into a series of increasingly dangerous situations, using the technology of everyday life to track and control their every move.

Storyline
Jerry Shaw is an amiable slacker with an over-achieving twin brother. After his twin dies in an accident, strange things happen to Jerry at a dizzying pace: a fortune shows up in his bank account, weapons are delivered to his flat, and a voice on his cell phone tells him the police are on their way. Jerry follows the voice's instructions, and soon he and a woman he's never met are racing through the city, on to a plane, and eventually to the Pentagon, chased by the FBI. She is Rachel Holloman, a single mom; the voice has threatened her son's death if she doesn't cooperate. The voice seems to know everything. Who is behind it, what is being planned, and why Jerry and Rachel?

Taglines:
If you want to live you will obey

Errors in geography:
After they get in the van they are told to drive to Indianapolis on 77 E 56th Street. However 77 E 56th Street is in a neighborhood with homes, not office buildings as shown in the movie.


In the plot of Eagle Eye,there are elements taken from the books
written by William Gibson,the video game Portal and movies like Enemy
of the State,I Robot and a long etcetera.But,in spite of that,I had a
very good time watching this movie.There's no doubt it's unoriginal but
the movie has an enormous energy that takes possession of the
spectator,so the final experience is very entertaining.The action
scenes are very well filmed : they are exciting and they feel
realistic.The movie has a good tone because it never stops
entertaining.The actors also did a good job.Shia LaBeouf,Michelle
Monaghan,Billy Bob Thornton,Michael Chiklis and Rosario Dawson bring a
lot of enthusiasm to their characters.I'm usually against the lack of
originality but,there are some occasions in which,that fail is redeemed
with a lot of good elements.Eagle Eye is one of that cases.I can easily
recommend this movie.I had a very good time watching it and it did not
bore me even a second.