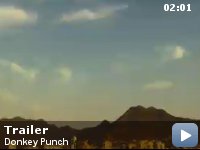 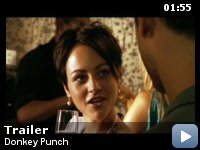 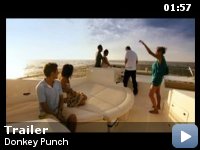 Things go drastically wrong for a group of British holidaymakers in Spain.

Storyline
After meeting at a nightclub in a Mediterranean resort, seven young adults decide to continue partying aboard a luxury yacht in the middle of the ocean. But when one of them dies in a freak accident, the others argue about what to do, which leads to a ruthless fight for survival.

Taglines:
This party is going overboard

The opening scene in which the girls hop from bar to bar is clearly shot in Cape Town, South Africa, along Camps Bay promenade. The first bar is Café Caprice and the second is The Grand (previously Opium on the Beach). The beach on which they are sitting when they first meet the boys is on the Atlantic Sea Board as well.

Continuity:
When Tammi sets off the flare at the end of the film she aims it behind her and to the right. When the flare goes off the shadow cast is from the front and the left.


I can't remember the last time that a movie squandered as much goodwill
in such a short space of time as this one does. The first half is
genuinely terrific, as six lairy, sexed-up twenty-somethings flirt,
take drugs and confabulate on a yacht anchored off the coast of an
unnamed Spanish island. Its like Hollyoaks as directed by Larry Clark,
and it is totally gripping.


But as soon as the titular incident occurs (and the titular incident
really does occur; just in case anyone else suspected that the title
was merely a jocular come-on) the plot suddenly helter skelters
straight into a brick wall; turning into the kind of dated, tiresome
trash that isn't only shockingly predictable, but also entirely unaware
of its own predictability. The film's twists are broadly apparent a
full ten minutes before they occur on screen, which makes for an
experience that isn't only boring, but also deeply and repeatedly
annoying.

This is one of those thrillers in which every cast member gets a turn
playing the volatile psychopath, purely because the script can't get
around the fact that the previous character to go loopy has just been
safely locked in a cupboard.

It never once stops being faultlessly directed – debutant Oliver
Blackburn coaxes some really outstanding performances from his young
cast, and there are a couple of devilish moments of genuine suspense
and black comedy – but these jiffys are like a tiny number of slowly
deflating rubber dinghies sinking into a gigantic ocean of generic
pish.

People merely looking for explicit sex will be very well served, but
the violence and gore is surprisingly tame for something that's being
marketed as a plasma-stained killfest.

A very brief, but nevertheless apt and effective homage to Phillip
Noyce's Dead Calm aside (a film so infinitely superior that I feel
guilty for even having mentioned it here) this is just a shoddy,
witless bore of a film.

And it all started so well.