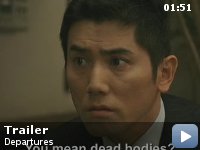 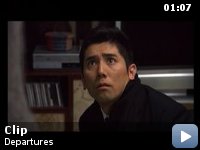 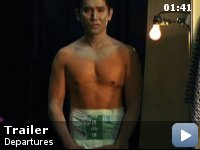 A newly unemployed cellist takes a job preparing the dead for funerals.

Storyline
Daigo Kobayashi is a devoted cellist in an orchestra that has just been dissolved and now finds himself without a job. Daigo decides to move back to his old hometown with his wife to look for work and start over. He answers a classified ad entitled "Departures" thinking it is an advertisement for a travel agency only to discover that the job is actually for a "Nokanshi" or "encoffineer," a funeral professional who prepares deceased bodies for burial and entry into the next life. While his wife and others despise the job, Daigo takes a certain pride in his work and begins to perfect the art of "Nokanshi," acting as a gentle gatekeeper between life and death, between the departed and the family of the departed. The film follows his profound and sometimes comical journey with death as he uncovers the wonder, joy and meaning of life and living.

Taglines:
The gift of last memories

The Japanese title "Okuribito" means "the sending [away/off] people" (as in: people who send) – but this word is not normally used in Japanese.

Daigo Kobayashi:
[voice over narration]
When I was a child winter didn't feel so cold. It's nearly two months since I moved home from Tokyo. It's been an awkward time.


By now almost everyone would have heard of this Japanese film Okuribito
(Departures), given its win in the recent Academy Awards, clinching the
Oscar for Best Foreign Language Film, beating the likes of crowd
favourite Waltzing With Bashir, and the Palme D'or winner The Class.
And now after watching it, it's no surprise really, because if I were
to go tongue in cheek, it's the novelty factor, given that the Academy
would never have conceived upon the notion that a film coming from Asia
and filled with death, corpses and coffins, would be anything but a
horror film. Seriously though, Departures have Awards written all over
it, with fine acting complementing a strong story to tell.

I suppose the equivalent of a "casketer" in local context, would be the
embalmer. And it's without a doubt a profession most misunderstood, and
shunned because of our innate fear of death. We choose to avoid death
where it had gone, and being an embalmer would unlikely be on any kid's
wish list of professions. Despite the stereotypical negative
connotations, it is a profession that is quite dignified, because the
professional is entrusted with the responsibility of helping the loved
ones of the deceased cope with the passing on, and to help ease the
pain in bringing some colour before the final journey to either the
burial ground, or crematorium.

Departures demystifies this profession in the Japanese context. And
like all things Japanese, the process comes with an elaborate ritual of
preparation, cleansing and presentation, all done with great precision,
skillful grace and utmost respect for both the deceased, and the family
members. The profession depicted here in the film, is one of the
highest order, where we see exactly how the casketers go about their
job, and the separation of duties with the undertaker.

Masahiro Motoki (last seen in The Longest Night in Shanghai) stars as
the lead protagonist Daigo Kobayashi, a cellist in an orchestra who
dreams of going places around the world with his wife Mika (Ryoko
Hirosue) in tow. Unfortunately for him, his orchestra folds and he is
forced to sell his expensive white elephant since he doubts he could
make his passion into a successful career. Dejected, he convinces his
wife to retreat back into the small town he came from, living in the
house his late mother had left behind, in order to start a new life.
Little did he know when responding to a job classifieds that a typo had
given him the impression he would be in a career that involves travel.
The boss of the shop Ikuei Sasaki (Tsutomu Yamazaki) hires him on
instinct, and as the saying goes, the rest is history.

For the curious, the film is an excellent medium to showcase the
profession and to do so in good light. We come to learn the craft
behind the job, and the necessity of it all, be it dealing with
grieving family members, or taking care of bodies that are bound for
autopsies. Departures paints through Daigo's experience, the varying
spectrum of emotions that one as a service provider would have to face,
as we journey with him from novice level. All's not doom and gloom of
course, as director Yujiro Takita paced the film with well meaning
humour – again never slapstick or disrespectful – throughout the
narrative.

The story by Kundo Koyama also excellently portrayed Daigo's
relationships with his wife and with his mentor, where the former was
like a rubber band waiting to snap because of Daigo's deliberate
attempts to not tell his lovely wife what he's up to for a career in
order to shield her from the taboo. With the latter from whom he picks
up the tools of the trade from, there's a surrogate father figure which
he never had while growing up, resulting in some pent up hatred toward
his dad who walked out on the family when he was young.

It's an extremely moving piece of drama that doesn't get bogged down by
melodrama, and I thoroughly enjoyed its themes of reconciliation,
forgiveness and best of all, being a professional and serving with
pride. It's a fantastically crafted film with an excellent cast all
round, and shatters all taboos that come with the profession of a
"casketer". I know it's cliché to say this, but Departures will be a
strong contender when I compile my list of top films for the year. It's
been some time already where I'm equally entertained and moved by a
film, and without a doubt, do not let this depart from our local
cinemas before you get a chance to watch it on the big screen. Highly
recommended!

TagsJapan
The Family That Preys
Filth and Wisdom